What happened to the native Britons after the Romans left? Little trace is left of them. Martin Waller investigates their fate. 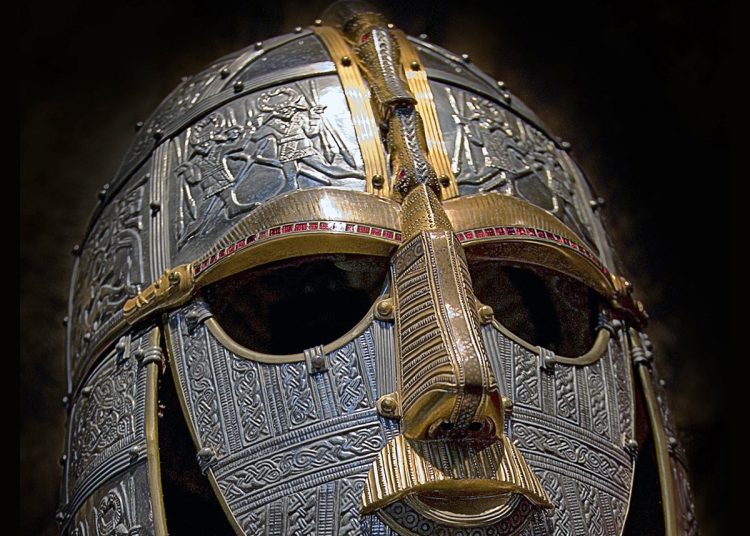 Living in East Anglia, you are never far from the evidence of the Anglo-Saxon invasions from the 5th Century AD onwards that transformed what had been Roman Britain – starting with the region’s own name.

From the street outside my house I can look way across the River Deben to the banks on the other side and the Anglo-Saxon burial ground of Sutton Hoo. Its discovery, just before the Second World War, features in the film The Dig.

The discovery was of the remains of a ship and of a burial ground within it containing some extraordinary treasures. Some of them came from a long way away.

Six years ago, archaeologists found what they believed to be an Anglo-Saxon palace at Rendlesham, not far from Sutton Hoo. This is currently being excavated, and the experts think there may be another burial site nearby.

One question looms over all this which has always fascinated me. If by the time the Venerable Bede was writing his history of the English People in the first half of the eight century, England, barring Cornwall, was an Anglo-Saxon country, what happened to the original inhabitants?

They were Celtic, like the peoples of Gaul across the Channel, and spoke a Celtic language we call Brythonic. This survives as Welsh and Cornish but appears, along with their Celtic culture, to have disappeared completely by Bede’s time and probably some while before.

Most people’s perception is that the Anglo-Saxons, hard-eyed, well-armed warriors, leapt from their longships like the Vikings a few centuries later and set about killing and enslaving the Celts. The Vikings certainly were like that, though if they came across a well defended settlement, they were often more inclined to trade than raid.

Most historians now believe that those Anglo-Saxon migrations may have been for the most part peaceable. I have been reading “The First Kingdom”, published last year by Max Adams, who has written several histories of early medieval England.

He largely goes along with the peaceful theory rather than rapine and slaughter. Early battles tend to leave behind plenty of evidence, in the form of bones and mangled bits of metal. Adams points out that there are very few such sites discovered from the pre-Viking period in England, and one appears to date from the early Roman period.

Historians at the time, such as Gildas probably writing in the 6th Century, have talked of war and conquest but their accounts appear unreliable.

Adams even queries the existence of a substantial warrior caste among the Anglo-Saxons. A classic warrior grave found at Lakenheath, Suffolk, does indeed appear to contain a warrior, buried with his weapons. But children, too, were interred with weapons. And as Adams says, warfare “was not the only manly pursuit requiring prowess and shiny equipment”.

Hunting was another. There is no evidence Lakenheath Man ever went into battle. In the burial of such weapons “ideas of manhood were being expressed,” he says.

What language tells us

So if they were not slaughtered or driven off into the Celtic enclaves of Wales and Cornwall, where did those Celts go? Adams looks at one aspect of their disappearance I have long thought of as essential to understand this. That evidence is linguistic.

Adams points out that there are said to be just ten Brythonic words surviving into medieval English. They tend to be fairly obscure ones, “brock” meaning badger, “coomb” meaning valley and common in place names and “crag” for rock. (My examples.)

“Even more decisively for linguists,” Adams writes, “no obvious Brythonic linguistic structures, such as its phonetic system or syntax, made their way into Old English.” Some survivals from Brythonic would have been expected if there had been several generations of bilingual speakers, using both Celtic and Anglo-Saxon.

I now veer away from Adams and offer my own views. Celtic and Germanic Anglo-Saxon are on different branches of the great Indo-European language tree and mutually unintelligible. Generally, when two separate languages come together, by conquest or migration, what emerges is a creole.

A good example is late medieval English. Read Chaucer and you can clearly spot which words derive from Anglo-Saxon and which from Norman French. The two languages fused, probably because the Normans were insufficiently numerous to impose their language on their subjects. This wider vocabulary gives English its extraordinary fluidity and flexibility.

The Anglo-Saxon invasions never created such a mix. There do not even appear to be many Brythonic loan words, where a language adopts a word from another because it lacks the term. This is surprising because Anglo-Saxon has a fairly limited vocabulary, which may explain why a more developed society later found the need for all those Norman French words.

(The best example in English of a loan word is “orange”. This derives from the Persian “naranj”, through the Spanish “naranja”. This applied to the fruit, and then to the colour, because early medieval English does not seem to have had a word for that particular shade.)

What place names tell us

There do not even seem to be many Celtic place names that survived. Drive through southern England and you keep passing road signs to places with names that are recognisably derived from Anglo-Saxon. Drive around America and you come across names such as Niagara and Manhattan that clearly derive from the indigenous languages and were adopted by the early settlers.

So where did Brythonic go? Back to Adams, who says the notion of a Germanic elite takeover always assumed the displacement of the original Celtic nobility. “But it is more likely that in most cases the privileges of lordship remained in native hands.”

My speculation again, though Adams largely supports it, is that it was a process of cultural assimilation. The Celts simply became Anglo-Saxons, losing their language and culture. This is not uncommon in history when the incomers are perceived as more advanced and part of an elite.

When the Romans left in the early 5th Century, much of England and Wales fell into ruin, particularly the cities. I have seen estimates that the population may even have halved, to a million or more. With a population that small spread across the country, it would not have been hard for immigrants to gain a foothold without conflict.

The Celts’ trade links with the Continent appear to have been lost. At Woodbridge Museum, where I am a volunteer, there is a coin from Sutton Hoo that originated in Byzantium, the Eastern Roman Empire. It found its way to East Anglia, at a time when there was no longer an overarching Continental authority like the Roman Empire, through numerous kingdoms in turbulent times.

This, and other evidence of high-quality trade goods making their way here, suggests a highly sophisticated trading network serving the Anglo-Saxons.

Adams makes the other point that life in Roman Britain for the Celts, outside the cities and huge country estates, must have gone on little changed. They would have had little attachment to Roman culture. “For the indigenous elite of eastern Britain, part of the attraction of adopting the new language and half-familiar customs… may have lain in embracing a culture that was both exotic and decidedly not Roman.”

And this is why I am not addressing you in a tripartite language derived from Celtic, Anglo-Saxon and French but in one that has its roots in a far more brutal invasion and subjugation of England and Wales some centuries later.