Art exhibition: the spirit wraps around me: nature as a second skin

Liz McGowan, a Norfolk-based artist has a new exhibition of her work featuring cloaks made of reeds and other 'fibres of the landscape'. 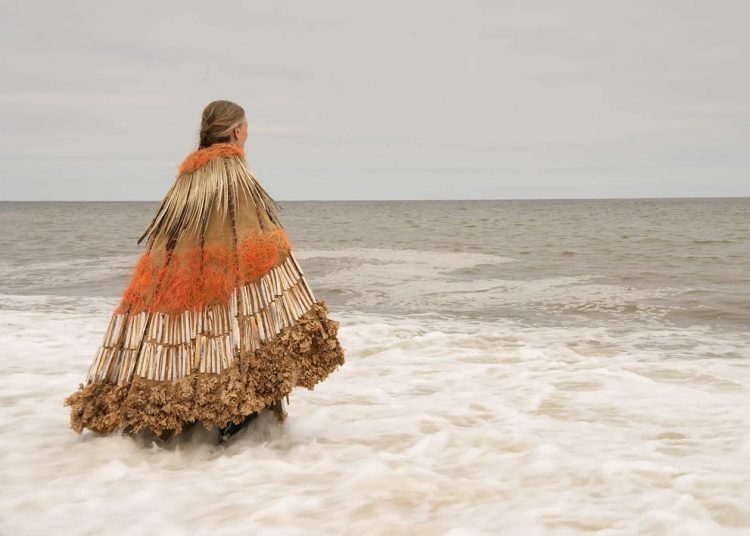 Acclaimed Norfolk artist Liz McGowan has a new exhibition from 12 June to 22 July 2022 at Stapleford Granary near Cambridge. McGowan works with natural and found materials, to create installations, sculptures and drawings. Here she talks to Kate Romano about her latest work.

Four years ago, on a warm sunny day in Brancaster on the North Norfolk coast, Liz McGowan wrapped herself in her Winter Reed Cloak. Made of reeds with soft brown plumes tied into a delicate lattice using fine cotton threads, it had taken her 4 months to make. She and celebrated landscape photographer Harry Cory Wright trod a path through the reeds, McGowan walking to and fro and Cory Wright walking a parallel route, taking photos as they went.

Liz McGowan is recounting this seminal day as we discuss her forthcoming exhibition at Stapleford Granary: the spirit wraps around me: nature as a second skin. What could be closer to wrapping yourself in nature than wearing a cloak made from the very fibres of the landscape you are walking in? But McGowan found it revelatory. “I didn’t design the cloaks for anyone to wear, let alone me,” she explains.

Inspiration for the cloaks

She first tried one on, reluctantly, under pressure from friends when it was hanging on the wall of a barn. Her husband took photos. “When I saw the pictures, I suddenly realised I had to be wearing the cloaks,” she said. But she stresses that the photos are about the relationship between herself, the cloak and the habitat. “I have to be there, but they are not about me,” she explains carefully, as if still processing the intuitive act of subconsciously weaving herself into her own art.

Cory Wright now photographs McGowan wearing all of her cloaks and each image is displayed near to its cloak in her exhibitions.

McGowan’s work grows directly from the Norfolk landscape and a lifelong fascination with the materials, details and patterns found in the natural world. As a child, she was an avid beachcomber, collecting treasures whilst on holiday in North Wales on the Llŷn Peninsula. “I know where the cowrie shells fetch up,” she says, “and the pelican’s feet. I know the way the colours of the pebbles change… reds, greens, maroons.”

Alongside five cloaks, her work includes sculptures and earth works made from saltmarsh mud in liquid form.

McGowan calls herself an ‘environmental artist’, a label she adopted in the 1980s and has continued to feel at ease with. “Back then, I was a bit naive,” she says. She knew the work of Andy Goldsmith and Chris Drury, but the transformation in her mind from ‘maker’ (she had always sewn her own clothes) to ‘artist’ took place via a series of discussions and collaborations with fellow artists of different disciplines, all offering constructive feedback on each other’s work. “Since then, I have always felt that my work is part of a conversation in some essential way,” says McGowan.

Creating art ‘in conversation’ with the Norfolk landscape is a lengthy process, starting from scratch every time with ‘huge play and experimentation’. For her 2021 River Cloak, McGowan spent time walking by rivers and overgrown canals, looking at multiple layers: currents, patterns of reflection and refraction and the plant life growing beneath the water.

She dried out blanket weed in her studio, transforming it into a fine textured dark green mat (“exactly the same colour as the bottom of a river”) and ironed recycled plastic shreds together. She collected water snails and swan mussel shells. She teased her own hair from a brush and mixed it with chalk, water and pva glue to represent water currents on the cloak.

Art with an environmental message certainly isn’t new. In the 1960s and early 1970s artists started to create work that was not intended for gallery spaces such as Robert Smithson’s Spiral Jetty (1970), a 1,500ft-long mud and rock piece in Utah’s Great Salt Lake, and Nils-Udo’s startling and temporary works made from borrowed natural materials.

Removed from their wall hangings and reinstated in the landscape, McGowan’s cloaks meld into the environment they come from, sympathetically mimicking the organic patterns and shapes that nature creates. McGowan describes the cloak as “mediating between the human body and the landscape it emerges from. It’s an invitation to immerse oneself in the more than human world, like plunging into cold water.” McGowan’s work exemplifies what it is to be part of nature, rather than to observe it. It represents the natural not as a concept detached from human endeavour, but something at the very heart of who we are. 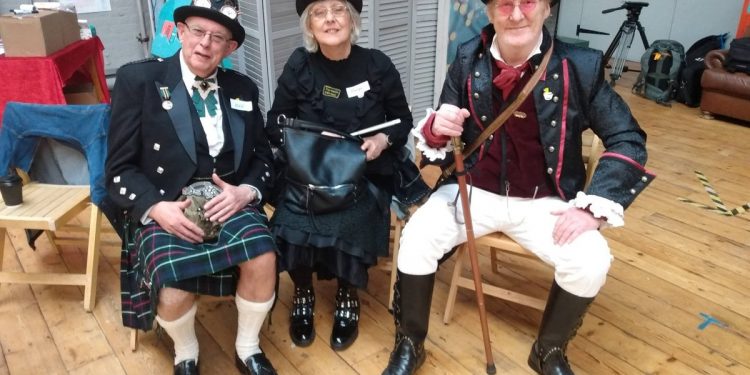