How two friends decided to make better beer than they could buy in their local, and launched the Brentwood Brewing Company. 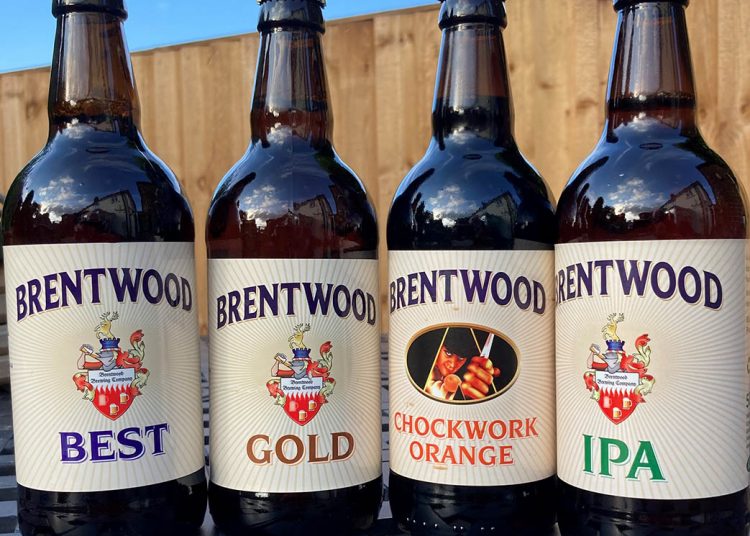 …one is an oil distributor, the other a Metropolitan policeman. They take a sip from their pints and look at each other. One says, ‘We could brew a better pint than this!’

As neighbours and friends, Roland Kannor and Dave Holmes shared a passion for a good pint of beer. And that was how the plan for Essex brewery Brentwood Brewing Company Ltd (BBC) came about.

They called their first brew, Summer Virgin – a light summer beer. It was produced in a small five beer barrel (BBL) plant on 4 July 2006. Sixteen years later, they are now based in their third brewery, next to the Calcott Hall Farm Shop in Ongar Road, Brentwood.

In 2008, local businessman Jason Jopson helped finance a new 20 BBL brewery, still in use today, and the move to their current location. Dave has since retired to Spain. Roland manages the business, whilst his son Ethan is now Head Brewer.

The brewery currently employs 11 staff, 8 of whom are full time, and has won many awards for their beers. A range of malted barley is supplied by East Anglian producer Muntons of Stowmarket, and the spent brewery grains are recycled to local farmers as animal feed.

Hopping all over the world

The mention of hops immediately brings to mind old black and white images of Londoners spending their holidays in Kent, harvesting them. Hops are the green cone-shaped flowers of the Humulus Lupulus plant. The British grown variety is ideal for flavouring traditional bitters. However, the demand for lighter, fruity, floral tasting beers has seen Brentwood use a wide variety of hops from all over the world.

Brentwood’s traditional beers – IPA, Gold, Best ­– are enjoyed across Essex, Hertfordshire, London and beyond. Occasional export orders created the opportunity for traditional Brentwood Beers to appear on retail shelves as far afield as Thailand. But as trendy, stylised bars started to open across London, the brewery had to adapt to offer new beers for a younger audience.

In the 1800s, a military barracks at Warley, a suburb of Brentwood, regularly deployed troops to India. As elephants were widely used in India for a range of tasks, an Elephant Training School was created in Warley to ensure the deployed troops had the necessary skills.

Jump forward to 2014, when the company launched the Elephant School brand: a range of modern beers. These included Mango Unchained, a pale beer with delicious malt and fruit aromas, and Mallowphant, where vanilla, chocolate, caramel and dried fruit flavours combine to create a sensually smooth marshmallow stout. Take time to drink and appreciate these. At strengths of 7.2% and 6.8% ABV (alcohol by volume) respectively, these brews are as far from a typical session beer as you can get.

Covid could have been a catastrophe

As Roland admits, without the furlough scheme and various Government grants and loans, the business would have folded. With the pubs and bars closed, the brewery was left producing occasional brews for bottling. They started offering home deliveries for online orders – a service that continues today.

As the country emerged from lockdown restrictions, Brentwood Brewing Company bounced back even stronger. They began contract-brewing for other companies and offered various one-off brews, such as Sam’s Town, in support of Sam Ryder from Maldon in Essex, who sang the UK entry in the 2022 Eurovision Song Contest, and Jubilee Juice and Bizzy Lizzy, two beers in celebration of the Queen’s Platinum Jubilee.

One of the more inspired offerings from Brentwood Brewing is for members of the public to spend a day working in the brewery. This opportunity has encouraged a number of new entrepreneurs. Four have made a career in the brewing industry. Probably the most famous is Jaega Wise, who is Head Brewer and one of the founders of the Wild Card Brewery in East London. In 2018, she was named Brewer of the Year, and has since gone on to become a radio and television presenter, pub owner and author.

In September 2021, Roland appointed Joe Butcher as an apprentice. Joe is a local resident and had contacted Roland on several occasions, hoping for the opportunity to learn the brewing business. A new Government apprentice scheme provided that opportunity. Joe has made rapid progress and proudly reports that, with some assistance from Ethan, the Head Brewer, he created the recipe for Jubilee Juice.

In all they do, Brentwood Brewing places value in having a strong corporate social responsibility ethos that benefits their local community. The company regularly supports charitable organisations. Local charity Special Needs and Parents (SNAP) has benefited from the sale of a number of specially brewed beers. The company also supports the Fragile X Society, that works with people with a genetic condition that causes a range of developmental problems, including learning disabilities and cognitive impairment.

From a small beginning, Brentwood Brewing Company is now fully integrated into the Brentwood community, providing employment for local residents, supporting other regional producers and organisations, whilst producing a significant portfolio of very tasty beers.