Aidan Baker reports from an event in Cambridge Market Square supporting a legal challenge to the Rwanda flights. 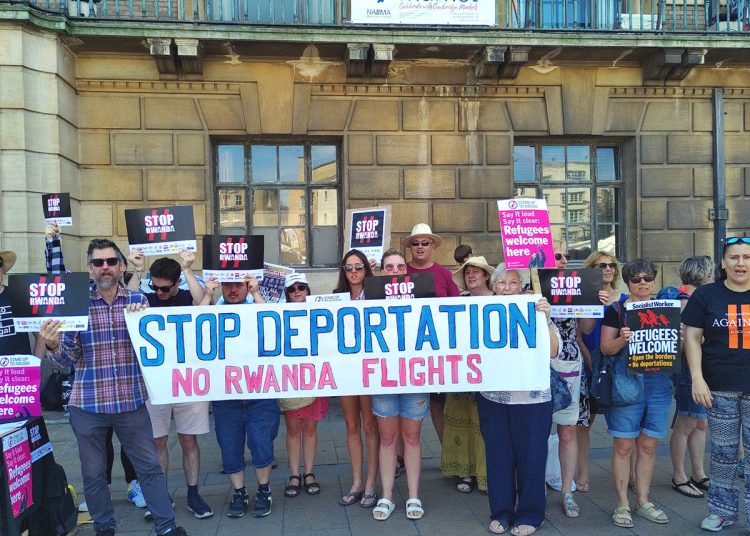 Demonstrators gathered outside Cambridge Guildhall on Saturday 16 July to protest at the government’s planned migrant deportation flights to Rwanda.

The event was one of a national set of actions in support of a legal challenge to the flights, mounted by the Public and Commercial Services union and the charities Care4Calais and Detention Action. The challenge had been scheduled for hearing on 19 July, but has been postponed until September.

Organiser Tom Woodcock, a teacher active in Cambridge Stand Up To Racism, said he was pleased the flights were on hold but it was shameful the threat of them was still there.  He read a statement from a Sudanese asylum seeker in the UK who was dreading the flight to a distant third country.

Other speakers told of relevant experiences they themselves had had.  Micaela of Care4Calais told of the effectiveness of direct action in stopping coaches and flights. Cllr Cameron Holloway contrasted Germany’s welcome to asylum seekers with the British keenness to deport them. He mentioned his own time as a volunteer reception worker at German railway stations in 2015, the year of Europe’s refugee crisis.

Several of the speakers looked forward to participating in a Twitterstorm on Tuesday involving the hashtag #StopRwanda .  Some reports say it reached trending number 3.