Hundreds of Cambridge residents took to the streets to show their support for Ukraine. 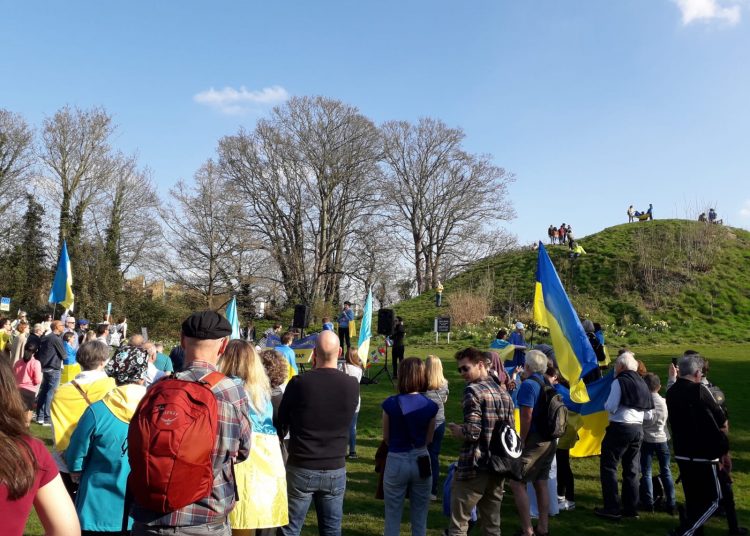 Hundreds of Cambridge residents marched on Saturday in support of Ukraine, just over a month since Russia began its full-scale invasion of the country.

The march, organised by Cambridge4Ukraine and Cambridge for Europe, processed through the city centre, before finishing with a rally on Castle Hill.

A little ray of hope

In a powerful speech, Olenka Dmytryk, co-founder of Cambridge4Ukraine, said: “This month has been the most horrible in my life and I’m sure in many people’s lives.”

“There has been a little ray of light as some regions have been freed and some Russian forces pushed back, and this is incredible, this is a miracle, and it’s happening because of many countries’ support.”

Ms Dmytryk spoke about the importance of retaining the attention and support of people from around the world. “Next month will be difficult because Putin’s strategy now is a long war, hoping that people will forget about it, so our goal now is to not let the world forget about the war in Ukraine.”

Mayor calls on government to do more for refugees

Mayor of Cambridge Russ McPherson also spoke at the rally on Castle Hill, telling Ukrainians in the crowd: “The city of Cambridge is firmly united with you and we are doing the best we can to support you.” Mayor McPherson also called on the UK government to do more to allow Ukrainian refugees to enter the country, as demonstrators held up pictures of Ukrainian refugees they had made contact with and were waiting to welcome into their homes.

Ukrainian opera singer and Cambridge resident Anna Starushkevych, who spoke immediately after the mayor, did offer one corrective to his speech, after he referred to Putin as “that gentleman in Russia”. Ms Starushkevych said Putin and his allies “are no gentlemen. They’re thugs.”

“It breaks our hearts to see how many people are losing their lives but we are not victims,” Ms Stushkevych said. “We will fight harder and do all we can to bring those [Russians] to justice in this world and beyond… Meanwhile the world will, I hope soon, witness the victory of the people of Ukraine.”

At the end of the rally, Ms Starushkevych led a rendition of the Ukrainian national anthem.

“We cannot let up”

Michael Clegg of Cambridge for Europe gave a rousing speech, in which he hailed Ukrainians’ courage and strength, but also exhorted people around the world to continue to support Ukraine, as they fight for freedom and democracy for us all. Cambridge for Europe has been hugely supportive of Cambridge4Ukraine in recent weeks, helping to organise events, raise money, and spread information.

Dr Rory Finnin, Associate Professor of Ukrainian Studies at the University of Cambridge, also spoke powerfully. He started by welcoming his 10-year-old son to the stage, who led a chant of Slava Ukraini/Geroyam Slava (Glory to Ukraine /Glory to the heroes). Dr Finnin said: “This war is in Ukraine but it’s not about Ukraine alone. This war is a war of values. This is a march, but it’s also a metaphor for the kind of support we need. We cannot let up. We need to keep the momentum going.”

Ann Galpin, chair of the NUJ Disabled Members’ Council and co-chair of the TUC Disabled Workers’ Committee, also spoke at the rally, expressing solidarity with the people of Ukraine, and in particular with the 2.7m disabled people in Ukraine.

Do what you can and a little more

Cambridge4Ukraine has set up a website with information about their events, and all the ways that Cambridge residents can provide support.

They are asking Cambridge residents to ‘do what you can and a little more’.

The group is also supporting UK citizens who have offered to host refugees, by putting them in touch with Ukrainians seeking a home.