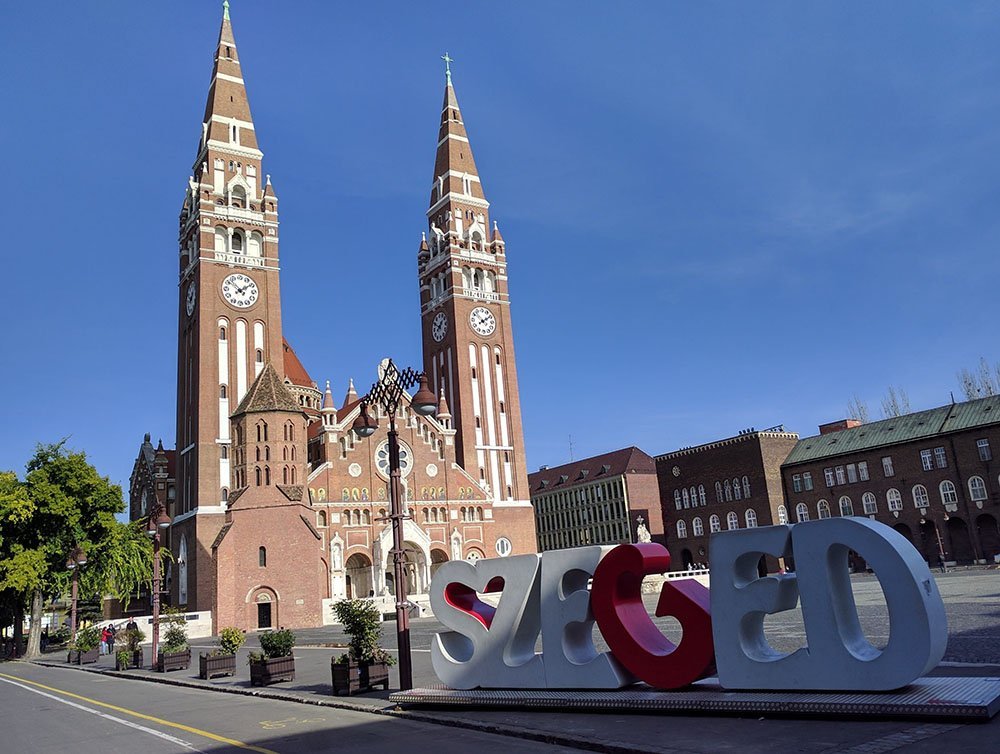 Many Cambridge citizens remain quite unaware of our second twin city, Szeged.  Despite Brexit, activities with our Hungarian sister city still continue – albeit subject to covid restrictions in 2020-21!

Szeged is a city in southern Hungary containing wonderful buildings. The city centre was largely rebuilt after devastating floods in the 19th century.  Many are in lovely golden sandstone and some are highly decorative. Much of the centre is pedestrianised. It’s ideal for indulging in a coffee or ice-cream while watching the world go by – at any hour of day or night.

Hungary is sufficiently different from Western Europe to feel “exotic”. It richly increases the cultural experiences whether artistic or linguistic, of all those introduced through our various activities, even the taste buds!

The twinning occurred over 30 years ago in 1987. But the last two decades have seen most growth, assisted by a small annual grant from Cambridge City Council.  We are grateful to them for their continuing support. It is also great to have the opportunity to bring our activities to more notice in these pages.

So, what does the Cambridge Szeged twinning society actually do?

Have a look at our annual winter newsletters. Here are a few tasters.

Local Cambridge artists have been taken to Szeged each May (when possible) to enjoy Bridge Fair. It’s a wonderful celebration of local arts, crafts & traders, attended by several of Szeged’s 19 twin cities’ representatives. It also conveniently coincides with the wine festival.

Over the years, cultural projects we’ve helped organise have expanded to:

Szegedi scientist, Albert Szent-György is credited with being the first to isolate vitamin C. During a visit, their science students were thrilled to see the original grey powder in a test tube. It’s held in the museum here to commemorate his 1920’s research.

I subsequently visited their school. Szeged University excels in medicine and pharmaceuticals. There have been exchanges of academic visits, as well as the Mayoral ceremonial ones.  In 2016-17 we also organised a symposium on Smart cities, Climate & Energy.

In 2010, two rowing eights from Cambridge University and City boat clubs went to Szeged. They were both beaten on the River Tisza by their local Szegedi counterparts.  The river was rising and a far cry from a relatively sedate race on the Cam!

Musical exchanges have increased greatly in the last decade after an original visit by Harmonia Consort in 2008.  Since then, five Cambridge choirs have had the opportunity to perform in Szeged. Some have performed in Budapest and at the Kecskemét Kodály Institute as well.  These include groups from:

– all of whom have experienced the magic warmth of the Szeged welcome.

The teachers, as Mentés Máskent, have visited each year from 2011, until Covid had other ideas.  In 2017 they mesmerised a crowd of 680+ on a perfect summer evening performing in the Botanical Gardens. They then delighted a very different crowd at the Big Day Out on musical stage and dance tent the next day. The Folk Club looks forward to welcoming them again.

Despite lockdown, the Society has continued a programme. We organised a series of zoom TALKS– with speakers from both cities on a variety of topics of literary and cultural interest.  These have attracted audiences of sometimes over 100. They joined us not only from Szeged & Cambridge, but London, Oxford, Budapest and elsewhere.  The live music element – usually four or five concerts in our Cambridge annual programme – has been sadly absent from the calendar. But hopefully 2022 will be easier in this regard.  The last concerts were in Szeged in late 2018, during 2019 in Cambridge with the last one in early 2020, just prior to lockdown. They were all the more memorable in view of the many months of silence that have followed due to the pandemic.

If you are interested in Hungarian culture, in exchange visits, in music, if you have skills to contribute building upon the foundations we now have, or can assist with the website, then do join us! Membership is free.  We can promise good chat with our widely experienced group – and a tasty garden party of authentic cuisine each summer.