Recent developments in opinion polling provide better insights into election prospects. The end of the year has bad news for the Conservatives. 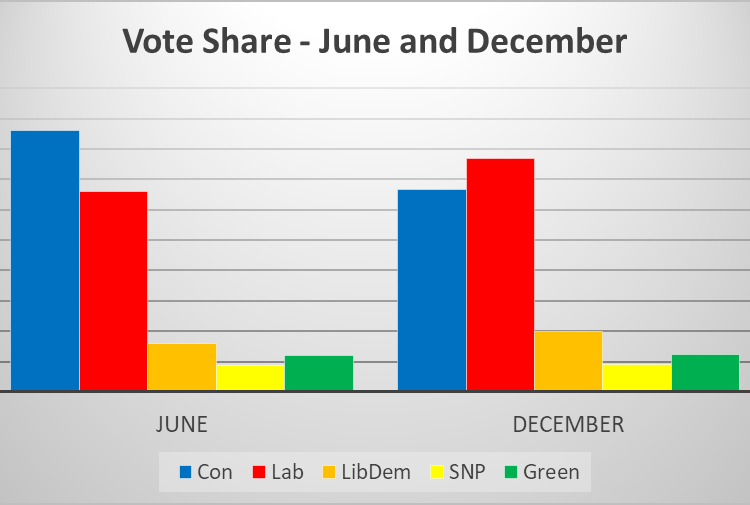 It would be very surprising if this did not represent a major revival in the fortunes of the Labour Party. However, under first past the post elections, a 6 percent swing in the national vote share would not give Labour a majority in Parliament.

Three recent polls help us to see what is driving the change, and what it would mean in terms of a majority in Parliament.

In December Focaldata carried out a poll for the Sunday Times. Analysing data at constituency level, they predicted that an election now would give Labour a working majority, with 338 seats, while the Conservatives would hold only 237 (their worst performance since 2005).

Survation carried out two polls, in November and December. Like Focaldata, they asked about voting intention, and analysed data at constituency level. They also added questions about the parties’ commitment to the Nolan Principles of standards in public office (selflessness, integrity, openness, objectivity, accountability, honesty and leadership). In every region, a majority of voters said that the present government was “quite unlikely” or “very unlikely” to uphold the principles.  This was a significant factor in changing voting intentions, especially among older voters.

When they compared the results of the two polls, Survation found a dramatic change. In November, Conservatives would still be the largest party, with 311 seats to Labour’s 255. But, by December, the picture had reversed, with Labour on 309 and the Conservatives on 255.

The December poll showed that 37 of the 40 “Red Wall” seats which Conservatives won in 2019 would return to Labour, and Conservatives would also lose seats to Labour in other regions. Labour would be 11 seats short of a majority, with a good chance of forming a minority government in alliance with Lib Dems and Greens.

It is clear from these results that the sleaze stories of December have seriously damaged the Conservatives.

What changes in the East?

Fifty-two of the 58 Parliamentary seats in the Eastern Region are held now by Conservatives. The polls suggest that nine seats would switch from Conservative to Labour. But in most constituencies the sitting Conservative would survive, because they currently have such large majorities.

Focaldata predicts that in the East:

Figure 1 shows the nine seats in the region which would change hands, showing their vote share in the general election of 2019 and their predicted vote share now. The list includes two junior ministers (Chloe Smith in Norwich North, and Will Quince in Colchester).

This poll also shows the potential of tactical voting. Figure 2 shows a further 13 seats where the combined Labour, Lib Dem and Green vote share would be larger than 50 percent, and voters switching to the 2019 second party could win the seat. Four of these are held by ministers (in bold).

Should we believe the polls?

People sometimes suggest that opinion polls are a poor guide to what really happens.  So how much weight should we put on these findings?

Opinion polls have been around in the UK since 1937. They are used by government and commercial organisations to test opinions on anything from public policy proposals to preferences for toothpaste. They also provide a guide to what people think about politics and political parties, and how they might vote.

Pollsters ask a set of questions to a large sample of people, matched for sex, age, region and other factors with the general population. In the past, this was done face to face or by telephone.

More recently, polling companies have been switching to online polls. Each company recruits a large panel of volunteers (the YouGov panel includes over 1 million individuals). It holds personal details of all those people, which makes it easy to ensure that the sample matches the general population. Because questionnaires are sent out by email and respondents reply online, surveys can be carried out quickly and cheaply.

Polls can only tell us what people say at a particular moment, and there is always a risk that an accident of question wording, or an item in the news at the time, will produce an eccentric result. So it is always wise to look at trends over time, not single results. Twenty consecutive polls from eight separate companies is a much better guide than a single one.

No poll can be absolutely accurate. Statisticians calculate that the sample size of most national polls means that the results are likely to be within 3 percent of the reported figure (the margin of error). So when a poll reports 50 percent, the real figure is likely to be between 47 and 53 percent. This is fine for marketing toothpaste, but in a general election, it is the difference between triumph and disaster.

A national poll can tell us about the whole population, but voting patterns may be very different in individual constituencies. So to understand the likely outcome of an election, one needs not only to know about national vote share, but also where those voters are.

However, conventional polling at the level of individual constituencies is impossibly expensive. So pollsters have devised “Multilevel regression and post-stratification” (MRP), to overcome this. This is how the constituency level results have been found in the Focaldata and Survation polls.

Both the Focaldata and Survation polls used MRP techniques, and although Survation is more cautious about the scale of the swing, they agree that enough Conservative voters are abandoning the party in key constituencies to change the composition of Parliament. On 1st January a Deltapoll for the Mail on Sunday showed Labour 16 points ahead in the constituencies that they lost to Conservatives in 2019.

This is very bad news for the Conservatives. Whether this is good news for Labour, is less clear. 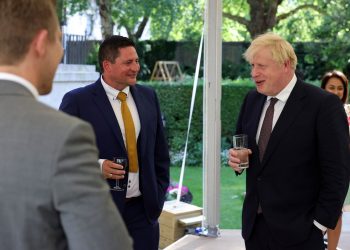 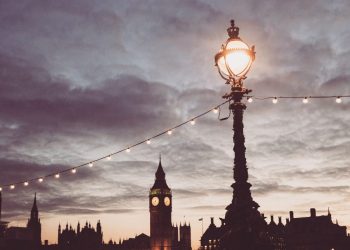