In a culture war coup, Boris Johnson has appointed Nadine Dorries - a critic of the BBC - Culture Minister, presiding over its future. 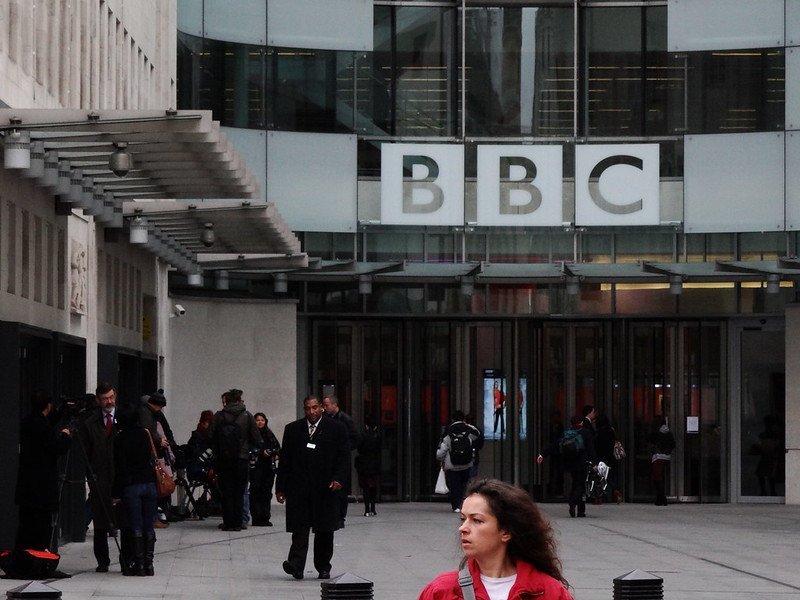 Culture Wars, Nadine Dorries And The BBC. Photo by Ben Sutherland at Flickr (CC BY 2.0)

To express an opinion that you will not find much here or elsewhere in the media, I think the appointment of Nadine Dorries as Culture Secretary is a masterstroke.

Boris Johnson could not better have signalled his and his Cabinet’s utter contempt for those on the other side of a culture war they have largely created and inflamed. Nothing could better get the bien-pensant, woke metropolitan elite enraged than the decision to put a minor TV celebrity who writes historical romances in charge of the nation’s culture.

And the purpose of the culture war is to artificially stoke rage on both sides, to distract from what is happening elsewhere.

Dorries, MP for Mid Bedfordshire since 2005, is a highly successful novelist, with earnings declared of £120,000, I read. This is not an easy achievement. Culture Secretaries are not necessarily cultured, nor do they need to be; John Whittingdale, one of her predecessors, once admitted his musical first choice was Deep Purple.

(To readers under 35: a loud, poodle-haired rock band of the 1970s. Think Nirvana without the quiet bits.)

Dorries probably exemplifies the cultural life of much of the nation, with her popular sagas and brief celebrity TV appearance. This is not to sound patronising; this, rather than the output of the (state-subsidised) National Opera House, is what most people consume.

Dorries and the BBC

There has been concern over her overtly anti-BBC stance – she thinks the Corporation is biased against Brexit and the Tories. Probably irrelevant, in that any Johnson appointment was always going to be anti-BBC.

Elsewhere on the culture front, the BBC has confirmed Jess Brammar to a senior role there, against fierce opposition from the Government. The row over this has gone on all summer. Sir Robbie Gibb, a BBC board member with strong ties to Number 10, had told Fran Unsworth, the outgoing head of news there, that Brammar’s appointment would shatter the Government’s “fragile trust” in the BBC.

Brammar’s crime? An experienced journalist who had previously put out Tweets, since deleted, critical of Brexit. This would appear to rule out a senior job at the BBC for 48 per cent of the voting population in 2016 and probably a higher proportion today.

(Incidentally, I worked with Unsworth’s sister for a long time. The media is a small world.)

Last year Number 10 triggered another row with the Corporation over a restriction to the provision of free TV licences to the over-75s on cost grounds. Downing Street said this was “the wrong decision”; the BBC countered that it was because the Government had stopped paying for the benefit.

The BBC chairman, Sir David Clementi, said the Corporation could no longer afford to waive the fee. I knew Clementi way back when; he is, or was, a decent man and one who I would trust to defend the BBC’s integrity and independence.

(Mind you, I would once have said that of Michael Gove, with whom I worked for a while at The Times. Probably not today. And I do not think I ever met Johnson, another Times alumnus, who was busy being sacked for dishonesty as I arrived. It’s a funny story*. Look, I did say it was a small world.)

The BBC is an odd institution. It is extremely bureaucratic. The joke is that its management is like a game of musical chairs in reverse. When the music stops, they put out another chair.

It does also foster a degree of liberal-minded groupthink. This does not come from above, in the way that some newspaper barons impose their political views on their papers. It is just that the sort of person who joins tends to share that same mindset. It is not thereafter much challenged.

This probably explains the perception, on the part of Dorries and others in the Cabinet, of bias. The Johnson Government’s relationship with the media is an odd one, in that I cannot think of an administration since Blair and Brown in the late 1990s that has been so close to it. Supportive journalists on some media outlets are given access to the latest announcements before they are put before Parliament, if indeed the latter is sitting.

Johnson and Gove, as former journalists, understand how to deal with the media. The degree of criticism by the press is, I think, relatively muted, given the times we have gone through and the triple crises of Brexit, the pandemic and Afghanistan. Those deliberate leaks impose a degree of control, given the threat that access could be withheld.

The real holdouts are in the broadcast media. Sky has been highly critical and has challenged the factual accuracy of some Government statements. Channel 4 has been even-handed, and some believe it is being punished for this by being privatised.

Some have also suggested the BBC has held back in its opposition. There is clearly some nervousness there. The dithering over the Brammar appointment, an entirely internal matter, suggests this. Its staff, though, are not encouraged to be aggressive in interviews, still least to point out, when it is plainly true, where a minister is lying. They cannot cope with politicians who lie, which in the current climate is, I suggest, a disadvantage.

The BBC, not an organisation used to cutting its cloth, is having to impose difficult cost cuts and job losses. About £400 million is being slashed from the current financial year’s budget. It is under pressure from streaming services such as Amazon and Netflix, whose demand for drama has inflated the cost of making such.

For various reasons its income in real terms has fallen over the past decade by a reported 30 per cent. The BBC also faces a Damoclean, existential threat. Earlier this year the Government shelved any decision to decriminalise non-payment of the licence fee. This would effectively have made it optional. Viewers and listeners would have been able to continue to do so but, if they felt like it or disagreed with the views expressed on the air, for free.

This would have killed the BBC in its current form – it gets about three quarters of its current income from the licence fee. However Oliver Dowden, Dorries’ predecessor, said decriminalisation would “remain under active consideration” and that criminal sanctions for non-payment were “increasingly unfair and disproportionate”.

The Government is committed to make no changes until the current Charter runs out in 2027 but the threat remains, then. And another abrupt change of course cannot, given recent events, be ruled out.

All this is not just media gossip. Given the underperformance, I would suggest, of some of the written press, an independent BBC is important. Part of this has be imposed from within the Corporation. Political interference has to be resisted. The BBC has to toughen up.

BBC at the heart of the culture war

But the public should be aware that an attack from the ruling party on the BBC is part of this ongoing culture war, and that the Government has an agenda. We may grumble about what we see and hear, and I agree its output can be infuriating. but we would all be worse off and less free without the Beeb.

Footnote: *Oh, all right then. Johnson was charged in 1988, as a junior reporter, to write up a press release about some archaeological discoveries at a Tudor castle. He was told to ring his godfather, an eminent historian of the period, for a lively quote.

He couldn’t be bothered to. He made up a quote. Something about Edward II and Piers Gaveston [Edward’s male lover] and their “reign of dissolution” at that castle.

Unfortunately Gaveston was murdered by a cabal of nobles some years before the castle was built. The godfather could not allow the quote to stand and demanded a correction. Johnson was sacked. The story, you might say, illustrates three things. Dishonesty, a sense of self-entitlement – why should I be expected to have to do the job properly? – and sniggering schoolboy smut.

I leave the reader to decide if the Prime Minister has displayed any such traits since.