Gender equality in politics is coming, but not nearly fast enough! Jenny Rhodes looks at what could encourage more women politicians. 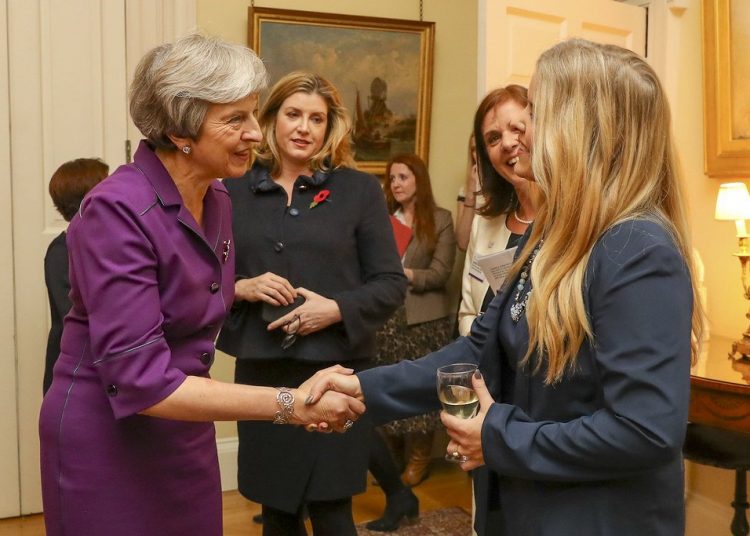 As Prime Minister, Theresa May meets female MPs from around the world. Photo by UK Parliament via Flickr (CC BY-NC-ND 2.0)

On International Women’s Day, we ask, do we have enough female politicians in East Anglia, and does it matter?

The UK’s first female MP, Nancy Astor, was elected to Parliament in 1919. Since then, leaden progress has been made towards equal representation. There are still nearly twice as many male MPs as female (65 to 35 percent). At this rate it will take another half century to achieve a balance.

In East Anglia, only 29 percent of MPs are female. We are still overwhelmingly represented by middle-aged men. All six Police & Crime Commissioners are men. In local politics, an investigation three years ago found that less than a third of East of England councillors were women.

It matters because diversity contributes to more inclusive decision-making, and on crucial issues like climate change, health, transport, policing and elderly care, the needs of everyone should be taken into account. Half of East Anglians are women, and government should reflect the people it governs. We need politicians with a more varied lived experience to speak authentically for everyone.

How does having more women make a difference?

Just having more women in the room changes the conversation. You may be surprised at a fascinating transformation over the last 25 years. Recent research into Parliamentary debates using ‘text mining’ reveals what MPs have talked about since 1945. Until 1997, the few women MPs were more likely to use words like family, medical, education, health and care. Male MPs were likelier to say words like argument, wrong, force, military and corporation.

However, since 1997 when women MPs nearly doubled, these differences have been eroding. The vocabularies are converging, not due to ‘masculinisation’ of women’s language, but changes in what men talk about. So the very emergence of a more balanced Parliament has changed the nature of debates.

Rightly, issues like welfare, justice, domestic abuse, equal pay and parental rights should not be raised solely by female MPs on behalf of women, but instead raised by any MP as important to everyone. It looks like this would increasingly happen with more women in the Commons.

Why are there still fewer women politicians?

One reason is family commitments. MPs whose home constituencies are far from London may not see their families for days. There is no automatic maternity leave or cover so constituents are left ‘unrepresented’ if their MP gives birth. In January this year, Commons Speaker Lindsay Hoyle said that he would no longer consider breastfeeding in the House as ‘banned’, however, this is not a long-term ‘childcare solution’. Parliament’s nursery has limited places and is expensive.

At a local level, there are few pension or maternity rights for councillors, who are poorly paid. Meetings are often in the evenings: a costly time for childcare. Tracy Brabin, who went from MP to the UK’s first female metro mayor, says that accessible, high-quality childcare is critical.

Local politics can be a springboard to national involvement: Theresa May was a London Borough of Merton councillor for eight years before entering Parliament in 1997. But if young women encounter barriers locally, they don’t have that step to the national arena. On entering Parliament, the average female MP has always been older than the average male. This may reflect that more of their younger years is focused on family.

In 2017, the Women & Equalities Committee made six recommendations to the Government to increase equality, but all were rejected. Setting a 50 percent minimum was not proposed amid concern that men may ‘become under-represented.’ It’s curious that under-representation of women, but not men, is countenanced.

There is significant evidence that a first-past-the-post system prevents more women being elected, and those with an element of proportional representation enable more.

Another obstacle is the ‘culture’. The vast majority of councils are still male-dominated, and Fawcett Society research found a third of female councillors experienced sexist comments from colleagues. Sadly, women politicians also receive more online abuse than men. Even local political party meetings, often run on traditional lines, can still be unwelcoming to women. A recent report into barriers to women entering politics identified fear of abuse as a real disincentive.

Since 2002, political parties have been allowed to draw up all-women shortlists of candidates. It has been employed by Labour and the Liberal Democrats, contributing to more than half of their MPs being women. However, the Conservatives currently do not practise it, and less than a quarter of their members are female. This is reflected at senior level: half the Shadow Cabinet is female, but only a quarter of the Government Cabinet is female.

The masculine, ‘boys’ club’ environment of the Commons is unlikely to inspire girls to choose politics as a career. A less adversarial, more balanced and respectful atmosphere would be generally more professional and productive for everyone.

50:50 Parliament campaigns for more inclusive government, and lobbies parties to be more gender-balanced. Their campaign #AskHertoStand reaches out to talented women to be candidates. This May’s council elections would also benefit from more women standing. Let’s hope that many more believe they can. We need radical changes, and the glacial rate of progress must accelerate.