As the latest wealth figures are published, J.J. Jackson looks at indicators of great wealth and great poverty in East Anglia. 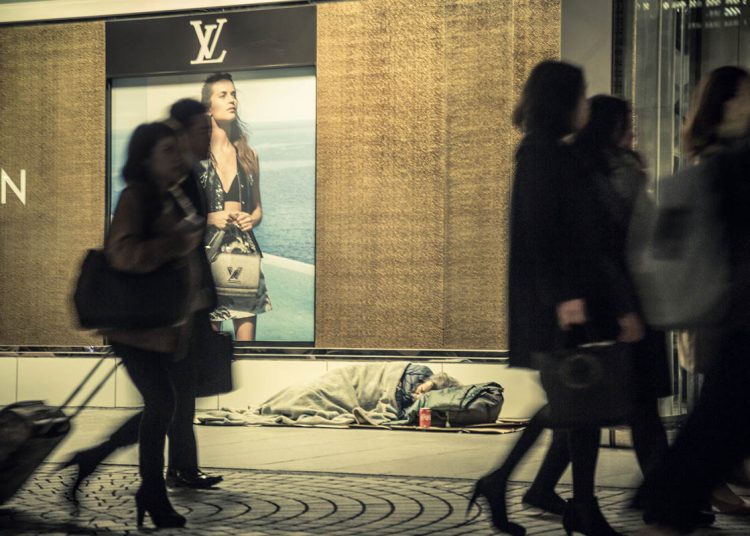 The Sunday Times Rich List was published recently. A number of those named either reside or have their companies based in East Anglia.

The 68-page special edition of The Sunday Times Magazine reveals the wealth of the 250 richest people and families in Britain in its 34th annual edition. 177 billionaires are recorded in the UK this year, up 6 from 2021, a year-on-year increase that is also a record. The combined wealth of the UK billionaires is £653.122 billion, up £55.853billion, or 9.4 percent, on the total wealth of the billionaires in last year’s Rich List.

This year the annual publication of the list coincides with increased concerns that the UK economy will soon enter a recession.

In first place Kirsten Rausing is cited as being the richest person in East Anglia with a shared fortune of £12 billion. Swedish-born Rausing, 69, has seen the wealth she shares with her Surrey-based brother Jorn, 62, fall by £1 billion in the past year. Their joint £12 billion fortune is largely derived from Tetra Laval, the Swiss-based global business which makes the Tetra Pak containers for food and drinks.

The Irish-born Earl of Iveagh, Ned Guinness, 52, who controls the Elveden estate in Suffolk, has become one of East Anglia’s four billionaires. The head of the Guinness brewing family has seen his fortune grow by £66 million to £1 billion in the past year.

In fifth place are Mike Lynch and Angela Bacares. Lynch, born in Ilford, is currently involved in legal action with Hewlett Packard in the United States. The Home Secretary approved his extradition earlier this year.

Leicester-born Alfie Best, 52 and star of My Big Fat Gypsy Fortune , is the wealthiest newcomer in the East Anglian Rich List, with a £700 million family fortune. Best founded Essex-based Wyldecrest Parks in 2001 and it is now Europe’s largest park home operator. The other East Anglian Rich List newcomer is Newmarket-based transport and park home operator Paul Day, worth £668 million.

The staggering wealth of these individuals is linked to farming, land ownership and transport. This contrasts with the widely reported concerns over the future direction of agriculture in the region, particularly amongst smaller farms. Many within the industry last year called for a strategy from Government on how to cope with Covid and Brexit. Others see the writing on the wall and are looking to leave the industry for good, taking vital rural jobs with them.

The City of Cambridge – hub of domestic computing in the United Kingdom, having played host to the formation of both Spectrum Computing (ZX 81) and Acorn Computers (BBC Micro) – has been identified as the most ‘unequal’ city in the UK in terms of poverty. There, 19 percent of all income generated is taken home by just 6 percent of earners, while the bottom 20 percent earn only two percent of that total.

In 2021, East Anglia property prices increased at above the national average, boosted by second home ownership. This will exacerbate already widespread inequality across the region, making it harder for low-income locals to get on the property ladder.

The Office for National Statistics has published deprivation figures that rank every local area by the proportion of people on low income. Some areas in the East of England rank in the top ten percent for wealth in England, whilst others are in the bottom ten percent. Jaywick, near Clacton, has been cited in recent years as the most deprived neighbourhood in England.