Pig farming faces a crisis because of a post-Brexit labour shortage in abattoirs. Up to 100,000 may need to be slaughtered. 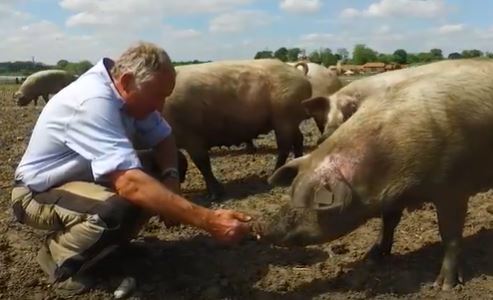 Pig farming is the latest industry to face crisis because of the labour shortage. There are 100,000 pigs ‘backed up’ on farms, many in East Anglia, but without butchers there are no means of sending them to market.

That figure increases by 15,000 each week. In spite of this backlog of animals, there is still a keen market for pork. The problem is that many of the skilled butchers who used to turn pigs into pork have returned to eastern Europe.

Ironically, this pinch point means there may be a shortage of pork, leading to our becoming reliant on imported meat which is already prepared for market.

The problem then would be with customs and the delays which Brexit will cause.

Zoe Davies is the chief executive of the British Pig Association (BPA).

“We are desperately seeking support from the Government, particularly the Home Office, to facilitate access to skilled workers now by providing a 12 month COVID recovery visa,” she explains.

“For the second time in under a year, the pig sector is facing really tough choices which we shouldn’t have to be taking, as demand for British pork is still strong.

“If Government doesn’t take action, perfectly healthy pigs will end up being destroyed and wasted and more pork will have to be imported from the EU.  I don’t believe this is what the British public voted for when they voted to leave the EU.”

There is the serious possibility that those 100,000 pigs will have to be slaughtered and simply rendered, as an emergency. There is no information on how or where that might be carried out.

If such a programme of slaughter were deemed necessary, it would not be an official cull, so there is no government compensation.

There is even talk of the collapse of the whole UK pig farming operation. Simon Watchorn is a pig farmer from Bungay in Suffolk. He keeps about 6,500 pigs at a time, and sends 300 each week for slaughter. He is one of those who has decided to leave the industry.

“Nine months ago I signed a contract on sows with a processor, and it takes them nine months from service to slaughter,” he says. “That’s a continuous production pipeline. Every week I serve animals and every week I have animals to slaughter.

“But I’m giving up. I’ll serve my last lot of sows in two weeks’ time, and then eventually they’ll all go for slaughter by the end of June. The losses we’re sustaining at the moment are…” He shrugs. “We just can’t carry on like this.

“If my customer tells me instead of taking 300 pigs this week he’s going to take 150, very soon I’m going to get into the position where I have to emergency slaughter. Because I can’t stop my sows having babies.

“I’ve experienced both swine fever and foot and mouth, and we had to slaughter on farm. That’s very costly, but also it’s…” There is a long pause. “I’ve done it, so I know what it’s like.

“I lost my entire herd 21 years ago and it’s extremely upsetting. We had to move 300 tons of dead pigs off my farm. Imagine…”

Ministers won’t mitigate for labour shortages due to Brexit

His exasperation is clear.

He is in no doubt where the main problem lies.

“We voted for Brexit to come out. We could spend a while debating it, but that ship has now sailed. We made these people feel very uncomfortable, so a lot have gone home.

“We’ve also made it very difficult for them to come back. They can’t – end of. The government just won’t listen, the same as with other industries.

“Covid had made it more difficult, but the biggest issue is: we actually need these people. We’re crying out for them. I don’t know what else all these industries who rely on them have to say.

“The amount of pressure that people are applying to ministers is phenomenal. Victoria Prentice, George Eustice, the BPA are meeting them regularly.

Home Office: ‘You can’t bring these people in’

“I know they’ve had meetings with Priti Patel, and at the end of the day it’s the Home Office who are just saying: ‘You can’t bring these people in’.”

“They say people voted for them not to come in. But did they vote for no flu jabs? Empty shelves?”

“Priti Patel needs to look me in the eye, and say: ‘I’m really sorry, Simon, but I’m the cause of your having to slaughter all your pigs. Look at the industry and say, you know what, I’m the cause of the collapse of that industry.

“Or look at vulnerable elderly people who really need that flu jab now and say: D’you know what? You can’t have that jab because I’m not going to let lorry drivers in.”

Simon’s last pigs, born a few days ago, will have grown up and will go to slaughter next June. That will be the end of his pig farming career. Whether or not it will also be the end of British pig farming remains to be seen.