Mention water towers, and people are divided. Some glaze over and edge backwards, and some light up with interest, eager to be enlightened. 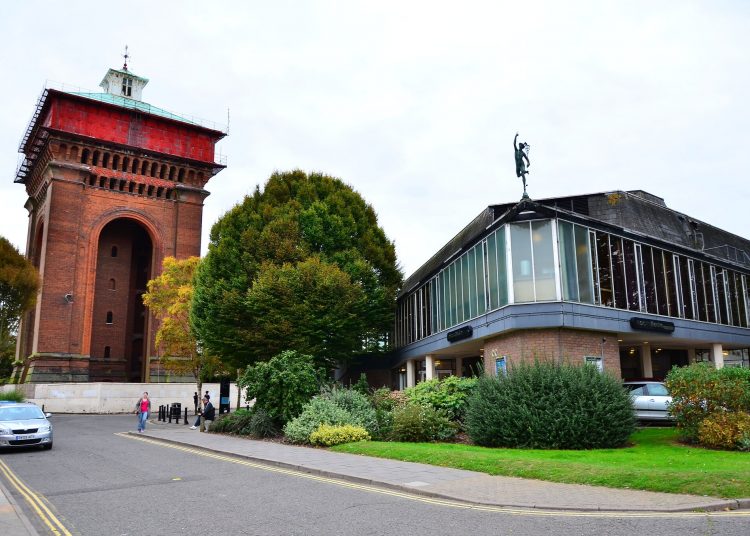 Mention a fascination with water towers and you’ll find people are divided into two sorts: those who suddenly glaze over and edge backwards, and those whose eyes light up with interest, eager to be enlightened. I am sure, dear reader, that you belong to the latter.

Allow me to explain.  About 13 years ago a friend mentioned (OK, in a pub, of course) that he had been out painting with some fellow artists and had chosen a view of a local water tower. His friends assumed he was having a senior moment and moved on.  ‘Not at all’, I cried, ‘I often include them in landscapes – they’re useful tall bits in otherwise fairly flat East Anglian landscapes’. And from this humble beginning, the British Water Tower Appreciation Society (BWTAS*) was born.

What could possibly be interesting about water towers?

In addition to drinking water, pressurised supplies are important in many aspects of life – such as industry, fire-fighting and agriculture. However, it was the growth of towns, especially during the industrial revolution, and their need for reliable clean drinking water, that led to the development of public water supplies. In the late 1500s towns such as Chester and London led the way. London’s pumps were housed under the arches of London Bridge, driven by water-wheels. They supplied water to a tank supported by a tall wooden tower.

After WWII, there was a huge programme of infrastructure renewal, bringing mains water to many villages and rural areas during the 1950s. The chances are that your nearest water tower is a functional concrete building from that period. This was when costs and practicality tended to eclipse aesthetics; mind you, beauty is in the eye of the beholder. You might also see telecommunications masts bristling on their tops. They can use a commanding height for signal transmission and also provide a ‘nice little earner’ for the water company, since each mast brings in an annual rental of many thousands of pounds.

From Roman water tanks, such as those found in the walls of fortifications, through mediaeval tanks in the flint walls of cathedrals, classical eighteenth-century towers in the grounds of stately homes – e.g. Houghton Hall – Victorian and Edwardian brick beauties, to quirky conversions (seen in the House in the Clouds, Thorpeness, and on Grand Designs), water tower design has reflected the state of engineering and building design of the times.

Many are fine examples of period architecture and are listed buildings. Look out for the rectangular steel tanks on stilts, usually painted black. They were built for local factory water supply and often for military use – such as on airfields – and still a common sight in East Anglia. These tanks are constructed of cross-braced panels, known as the Braithwaite design. Knowing the dimensions of a panel (often 3ft x 2ft) allows you to calculate the volume of water the tank holds. (Oh, your attention is wandering – don’t spill tea on your anorak.)

Early purpose-built towers were of wood, supporting a lead or cast-iron tank. However, with increased demand and the requirement for larger tanks, brick and stone supporting structures were more practical. Most were not just functional, but embodied fine architecture, and many today are listed buildings. Ironically, redundant water towers are also in demand these days for Grand­-Designs-type house-conversion projects. Cast-iron tanks superseded lead, as they were lighter, stronger and more easily assembled. Iron or steel tanks built from riveted flanged panels (such as the Braithwaite design) can be seen today – especially on railway stations, airfields and factory sites. In the mid twentieth century, these gave way to concrete, often pre-cast, designs for ease of construction and to accommodate very large volumes of water, often several hundred thousand gallons.

To maximise the tank capacity and reduce the mass (and cost) of the support, many ingenious designs for reinforced concrete towers (notably by Mouchel in the early 1900s) allowed load-bearing by a slim central tower with peripheral thin legs – a far cry from the old solid four-square or circular towers.

How a water tower works

A water tower provides a constant head of water pressure to the supply using gravity – just like the cistern in a domestic loft. After purification, water is pumped up into the tank with the level maintained by a float valve. Usually, the water level in the tanks falls during the day when demand is high, and is replenished at night, often taking advantage of ‘off-peak’ electricity to pump it. These days, however, very few new water towers are built in the UK. Nowadays, sophisticated control systems allow in-line electric pumps to maintain water pressure by responding instantly to changes in demand.

Water towers were originally part of fortifications such as city walls, defending access to a water supply. Collecting tanks, ‘cisterns’, were usually gravity-fed from the source. Today we use the term water tower to describe an elevated tank, usually built on high ground or supported by a tall structure to produce a ‘head’ of pressure for the supply.

Early pumps were ‘force-pumps’ – a piston in a cylinder with a non-return valve. These were driven by a variety of means: water wheels, wind power, horses, and, with the industrial revolution, steam engines. At the turn of the twentieth century, petrol and diesel engines began to dominate, giving way to electric pumps in the second half of the century.

Lead pipes, first introduced by the Romans, were used for centuries, as well as wooden pipes. But weakness and leakage problems led to the introduction of cast-iron pipes in the late 1600s. Today’s pipes are of iron, steel, concrete and, increasingly, plastic.

Many friends – and some strangers – who I’ve introduced to water towers often say ‘I never noticed them before, and now I keep seeing them’. I’m sure that far-away look in their eyes is one of wonderment – I hope you’ll share it!

Formed in 2008, we now have over 300 members worldwide, and maintain a large database of information on British water towers, past and present. We are often consulted on water tower history, and have featured in several radio & TV programmes. Each year we organise visits to water towers and other industrial heritage sites. And yes, we have featured as the ‘Guest Publication’ on Have I Got News for You.