How one Norfolk publican organised an aid convoy for Ukraine 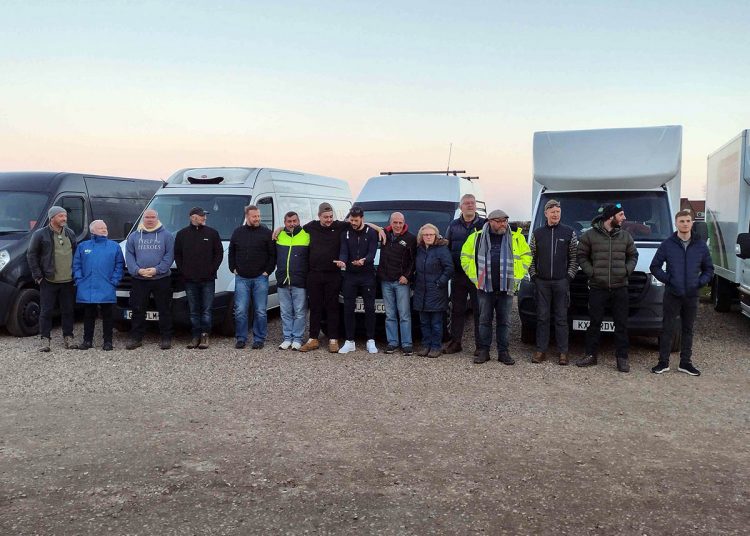 This interview has been lightly edited for clarity

The Banningham Crown in Norfolk sits opposite the church of Saint Botolph, patron saint of travellers and wayfarers. For 30 years the pub has been owned by the Feneron family, and it was here that Simon Feneron, who grew up in the pub, first saw reports of the Russian invasion of Ukraine.

“Particularly in the scenes of the first few days, images of fathers stood at train windows waving goodbye to their spouses and their children, that just struck me straight away.”

Simon is a manager at the Banningham Crown, running his own events business alongside. He told me it was easy to empathise with the Ukrainian men he saw on the news, being a new father himself.

“I’ve got a young son who’s five months old, and I thought about him and his mum and, if we were in Ukraine, what would I want for them. And the answer was help, and a lot of it.v

On the Tuesday evening after the invasion, Simon was sat by the fireplace in the pub, telling a friend about an idea he had to load up a van and take aid to wherever most needed it. To his surprise, his friend agreed to go with him, ‘perhaps half-heartedly”.

“He went home for a split shift, came back, and I told him I’d booked a van and he needed to go and talk to his wife, because he was coming!”

The two made a post about the trip on Facebook and the next day they began receiving donations at the pub. By the afternoon, one long wall of a room usually packed with diners was stacked high with clothes and other supplies for Ukrainian refugees. Simon spoke to the booking manager at the local village hall, who offered to house the donations for free.

“It became clear that the donations weren’t going to stop. People certainly felt that they were part of it a little bit more. Obviously, The Red Cross, UNICEF, all do amazing work, but this was a bit more personal to them. They could be a part of it, and it felt like it was more local.”

Andrew James, a local taxi driver, echoed this sentiment. He heard about the Banningham Crown’s effort through his local social club in Trunch, almost eight miles away. James said, “You can see stuff happening in the flesh. You see the products going there and you see the people going off, so it’s actually going where it should go, which counts for a lot”.

Donations continued to be made, and it became clear that if all the supplies were to arrive where they were needed, Simon would have to source more vans. Simon told me that because of the paperwork needed to go through Europe, it was difficult to organise more vehicles. Finally, they secured eight vehicles in total, and enough drivers to take shifts through the journey to Poland.

“One of these was my dad coming in his 4×4 just to get more stuff there. We still had things left over at the end of it.”

On the evening of Monday 7 March, the convoy set off from Banningham. With them was a teddy bear they called Buddy, their mascot for their journey. Their plan was to take a picture of him in all the places they stopped, for those following the story on social media.

They caught a ferry from Harwich to Hook of Holland, sleeping in a complimentary cabin provided by the ferry company, Stena Line UKIE, when they heard what the group were doing. The next morning they woke up on the mainland of Europe.

They set out at 8.30am and drove all day until they arrived at their hotel in Poland at 10pm, with the exception of one van, which was forced out of action after its engine was filled with the wrong fuel. The van and its drivers stayed overnight in a German village. After repairs were made, the drivers delivered their cargo to an aid centre in Berlin on Wednesday 9 March, travelling to meet the rest of the convoy in Poland the next day.

Meanwhile, on Wednesday the rest of the vehicles had made their way to Zamość.

“It was quite an interesting journey. We went through snow, sleet, hail, and massive hills. We passed convoys on the way there, all blacked out. They were definitely army trucks and whatever they were carrying was wrapped and escorted by no less than ten police vehicles down the highway. It was very clear there were things happening, and that happened more and more the closer we got.”

They received a message from their contact in Poland saying that the warehouse they had planned to deliver the donations to was full, but another unit had been rented. When the convoy arrived at the unit, at 1.30pm Wednesday, Simon’s van went through first, leading the volunteer at the unit to believe they were receiving one van of donations.

“I pointed to our van and held up eight fingers, and his face dropped. He had two cadets with him who whipped out their phones and started making countless phone calls, which obviously amounted to, ‘people, please come and help us’. Then it got quite emotional. He welled up, I welled up, I cried, he cried, and it was clear that we’d made it. That was quite a special moment.”

It took about an hour to unload the donations. Everyone was in good spirits and afterwards they hugged and took pictures together. Afterwards, Simon and some of the other members of his group made the decision to drive to the border between Poland and Ukraine.

Down at the Ukraine border

“It was about 45 minutes’ drive and the closer you get the roads go from really lovely to a pothole every 12 to 15 inches. We pulled up towards the border and if you can imagine a valley, you’re looking straight down it. On one side you’ve got a road going in and out, but out is managed a different way. It’s absolutely choc-a-bloc, with lorries, vans, police escorts going past, Red Cross vans. There’s a lot happening and it’s being very carefully managed.

“Down the left side of this road there are tents and marquees as far as you can see, and just people dwelling.”

“We went into this aid tent and there’s this pot of soup, which someone’s continuously cooking and adding things to, there’s kids with mums around. And you see them – they’ve got their entire life in a carrier bag. And you think, if I was faced with that decision, what would I do? How would I even go about judging what was the right thing to put in that carrier bag? How can you fathom that? They’ve gone from being normal citizens like you or I, going to work, being with the people we love, to: ‘You must go, and you must go now, and you can only take what you can carry’.”

Simon then tells me about the thing he says scarred him most about the experience.

“There’s this boy. I can still see him now, no older that six or seven, and to me he looked alone, but I don’t know – he could have had family round – and he’s got a number written on his hand in permanent marker. It looks like a phone number. and he’s washing his other hand so he doesn’t rub that number off. It just didn’t make any sense to me, at all.

“We found that we couldn’t give Buddy to anyone. What started out as a good, well-intentioned thing, very quickly became almost inappropriate. The orders of magnitude of the problems that these people had was so much greater than a teddy bear.”

Although Simon felt he couldn’t ask people to be as generous as they had been a second time, when the group got back to Norfolk, he received phone calls and people visiting the pub to ask when they would next be making an aid trip. As a result, The Banningham Crown are currently receiving donations and plan to set off for Poland and Berlin on 10 April – this time almost tripling their capacity with a 21-van convoy.

You can find out how to donate, or how to volunteer as a driver, via The Banningham Crown Facebook page. If you want to help or have related enquiries, you can email them at enquiries@banninghamcrown.co.uk with the subject line: Donate to Ukraine. This is their original crowdfunder. Please consider donating for their next trip in April.