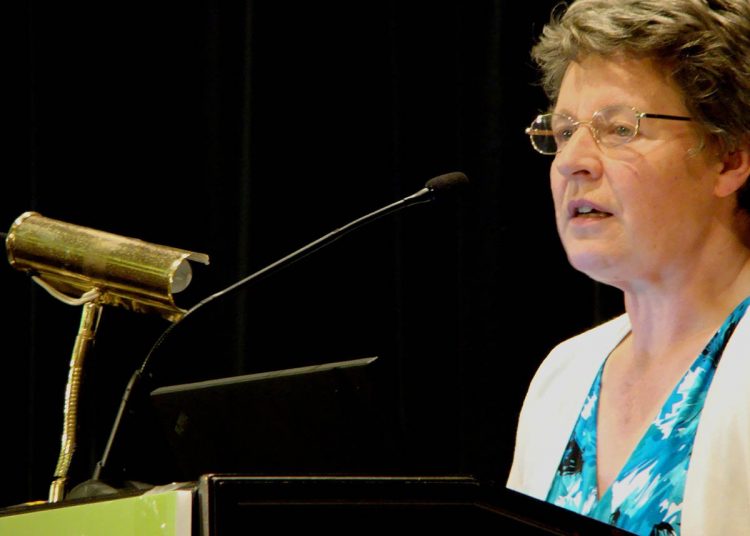 They say you should never meet your heroes. That was certainly true when I had the chance to speak to Dame Jocelyn Bell Burnell. All I remember saying was: “burble burble think you’re wonderful”. I do remember being answered with her characteristic grace.

Why have I chosen Dame Jocelyn to highlight for International Women’s Day? Not just for her intelligence and ability, though she has those in abundance, but for her attitude to not winning a Nobel prize. As a postgraduate student in astronomy she discovered pulsars, for which her supervisor shared a Nobel prize, but she was not included. At the discussion session I attended she said something she must have said many times, and certainly has in print: “I have had so many prizes, and so many honours, and so many awards, that actually, I think I’ve had far more fun than if I’d got a Nobel Prize — which is a bit flash in the pan: you get it, you have a fun week, and it’s all over, and nobody gives you anything else after that”.

We could claim an East Anglian link to Dame Jocelyn as she made her discovery at the University of Cambridge, but my next choice is firmly one of ours, hailing from Norfolk. Professor Bridget Shield MBE was the first female president of the Institute of Acoustics and her work on noise has extended from the effects of railway noise to concert hall acoustics. She is particularly interested in the effects of noise on children’s learning. Her MBE was awarded last year for services to acoustics and to inclusion. One of her projects there was as part of the team who set up the Women in Engineering Centre.

Sharing Bridget’s love of music, Dr Anne-Maria Brennan has a wide range of interests. She worked with the then Otley College in Suffolk to develop, design and inaugurate an MSc in Conservation, and she holds the British Science Association’s Sir Walter Bodmer Award for her voluntary work on the public understanding of science. She is interested in the importance of the Islamic world’s scientific inventions and discoveries and is a director of the Foundation for Science Technology and Civilisation. She sits on the Parliamentary and Science Committee and is a Freeman of the City of London. As if all that weren’t enough alongside her day job, Anne-Maria sings with the Philharmonia Chorus.

There are other inspiring women in science and engineering whom I have been honoured to know, for instance Professors Agnes Kaposi and Daphne Jackson. One I should most certainly have liked to meet, but she was of a much earlier generation, is Amy Johnson. Most famous as an aviator of course, but was also President of the Women’s Engineering Society, which presents an award in her name — the Amy Johnson Inspiration Award. Professor Jackson, who died at the early age of 51, also has an award in her honour, this one to encourage women to return to research careers. The Daphne Jackson Trust is so successful it has recently expanded into new fields.

It is easy to name women who are ground-breakers and inspirational, but sometimes it must feel rather daunting to a young woman deciding her career direction. Not everyone is exceptional nor wants to be. Amy Johnson did set out to be a pioneer, but most ground-breaking women in science and engineering just wanted to use their talents and follow their professional interests.

I used to be the course director of a foundation year in engineering, and among the students there were always women who’d decided what they really wanted to do was become a professional engineer. They hadn’t realised until their twenties or even later they had ability and could earn much more than in their current jobs. They would cope with families and part-time jobs all while studying full-time and yet remained committed and enthusiastic. It was a real pleasure when they came back after graduating to tell me about their new careers.

So I would say to any woman who is fascinated by how things work: if you want a career that is rewarding both financially and in terms of job satisfaction, then find out more about engineering and science and don’t worry about what other people think.