The government's Kickstart programme is helping young people into jobs. The scheme could help the green energy sector flourish. 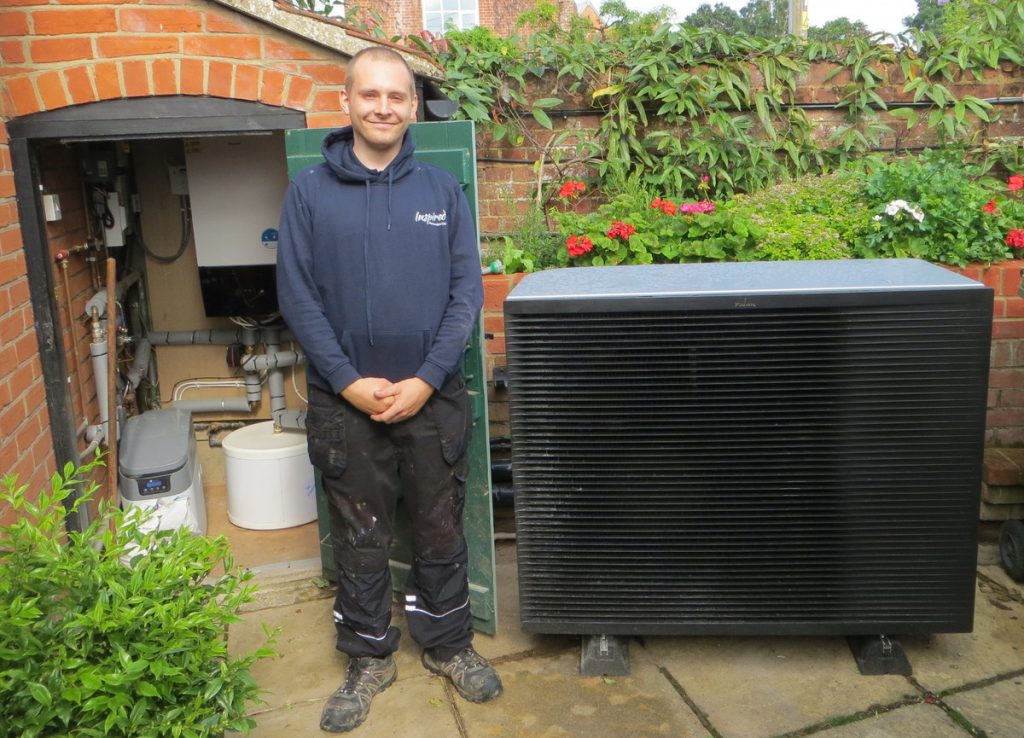 Kickstarting a green career - Liam with a heat-pump. Photo by Stephen McNair

We all make mistakes, especially when we are young. Brain science now tells us that many people don’t fully complete their brain development until the mid-20s. Yet, some of the mistakes young people make during that time will limit their chances for the rest of their lives. And it can be very difficult to get back on the straight and narrow.

So it is really encouraging to see someone take the decision to climb back on the ladder. That’s what Liam is doing. I met him when he came to help install my heat pump on his first day in a new job. He was articulate, and polite, with a nice sense of humour. And he was evidently keen to learn and enthusiastic about the work.

Looking for the lightbulb

He wasn’t always like this. At sixteen, Liam had a passion for music and drama. His acting was good, but writing essays pulled him back, and he left school with unremarkable GCSEs. He went to Norwich’s Access Creative College, where he got a Level 2 qualification in vocal music. He got into a talent show, but failed to turn up.

There was no great crisis; he just lost his way, moved out of the family home into the YMCA and hostels, and drifted into low skilled work. As he now says: “I didn’t have my head screwed on, I couldn’t find the lightbulb”.

Then, one day, the bulb lit. He can’t explain what pressed the switch, but he decided he had had enough of the life he was living and decided to get back into education, get a qualification and a proper career.

And he found the government’s Kickstart scheme. Kickstart provides six months of funding for employers to create new jobs for 16 to 24 year olds who are on Universal Credit, and at risk of long term unemployment. Liam registered on the programme, and went looking for an employer.

The firm he found was Inspired Renewables in Acle, Norfolk. The firm was trying to expand, but struggling to find enough workers to cope with growing demand for green energy installations. Liam was one of three young people they took on under Kickstart, to join their existing 12 employees. They took him on, he got his driving licence, Kickstart funded him to get a proper set of tools, and his grandfather helped him to buy a motor bike so he could get to work anywhere. On his first day, he was out with one of the Inspired engineers helping to install an air source heat pump, watching and learning.

Green energy is a rapidly expanding business. The Guardian has just reported that the UK’s low carbon economy is already four times larger than manufacturing. Andy Glanville, Director of Inspired Renewables, said: “We have clearly got work, and I can’t find people to do it. So I have to find good young people, and train them up. Kickstart is one of the best programmes the government have come up with. It gives me a chance to have a proper look at potential recruits from people who we might never have considered, and get them onto proper apprenticeships. I am hopeful that all three of my Kickstarters will be able to develop a real career in a growing field. It’s good for them, for my business, and for the world.”

Liam has now applied to Norwich City College to bring his key skills up to scratch so that he can start on a proper apprenticeship within the year. Inspired are helping him to sort out funding for courses. Although he still cares about drama and music, he says “that’s going to be more of a hobby”. He is now really focused on becoming a fully qualified plumber. We all know that the world needs more people with skills in green technologies. Liam has made a good career choice. We could do with a lot more like him.