Protesters campaigning for voting reform gathered in Cambridge as part of a national Make Votes Matter day of action. 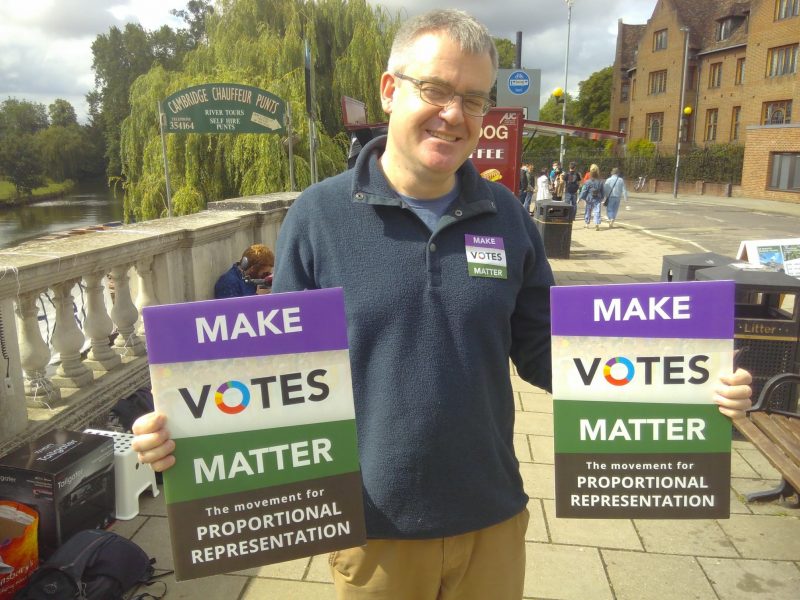 Campaign group Make Votes Matter organised a ‘banner drop’, in Cambridge on Saturday morning. The banner drop was from Silver Street Bridge, where the road from the city centre to the College crosses the River Cam.

Local residents and politicians from around Cambridge lowered a banner over the bridge parapet reading “MAKE VOTES MATTER”. Make Votes Matter is a national voting reform movement in favour of Proportional Representation (PR).  The aim is to make Parliament a more accurate reflection of the way citizens vote.

The crowd of about 30 people heard from organiser Paul Browne. Other speakers present were Council Leader Lewis Herbert, Councillor Naomi Bennett and James Catmur. They unpacked their reasons for favouring proportional representation as a voting principle over the ‘First Past the Post’ (FPTP) system now in force for Westminster elections.

Lewis Herbert praised the more co-operative style of politics in countries that had PR.  Natalie Bennett said the FPTP system led to a dangerous disengagement from politics. She’d heard of Cambridge streets where only 10% of eligible people turned out to-vote.

National organisers asked protesters to ‘Make Noise for Proportional Representation’. So following the banner drop there were chants: “What do we want?  Equal votes! When do we want them? Now!” They also raised a noise with voices, pots and pans and other instruments.

The river near Silver Street Bridge is a prime spot for punt hire and gets very busy later in the day.  Punt touts asked demonstrators, as they left, what the noise was about, and took away a rapid explanation.

The Cambridge event was part of a national ‘Make Noise for Make Votes Matter’ day, with groups taking part all over the country.

Elsewhere around the country