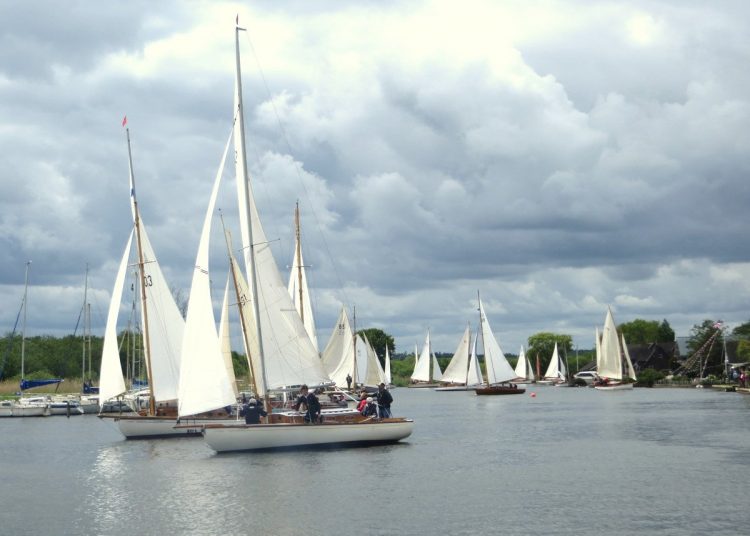 The start of the Three Rivers Race. Photo by Stephen McNair.

Norfolk once provided thousands of tons of peat to fuel the fires of the region. But since those peat diggings flooded in the 14th century to form the Broads, boats have been central to life in much of the county. They have been used for cutting reeds for thatch, and duck shooting; great trading wherries have moved grain and timber; and in the 20th century, pleasure boats have come to dominate, from huge motor cruisers to racing dinghies and cruising yachts.

Sixty years of a unique race

Since 1961, the great annual event of Norfolk boating has been the Three Rivers Race, organised by Horning Sailing Club. Sailed this year on 28/29 May, it brings sailors from around the country, and onlookers from around the region.

The race is the supreme test of skill, stamina, planning and luck. As one lifelong sailor from Coltishall said “that was the hardest thing I have done in my life”.

Over 100 boats, from two person dinghies to 40 foot cruisers, race a 50 mile course through the winding, often narrow, tidal rivers of the Norfolk Broads. One starring class is the surprisingly named “Norfolk Punt”, evolved from a heavy duck shooting boat into one of the fastest two person racing boats in the country.

The race course begins and ends on the River Bure at Horning. All boats must round four marker buoys, at Ludham Bridge, South Walsham Broad, Hickling Broad and on the River Bure downriver from Acle. Competitors can choose any route, provided they pass all four markers, without any power, or assistance from the shore.

Boats must complete the course in 24 hours. In a good year, the winners will complete the course through the Bure, Ant and Thurne in under 8 hours. But most come home in the early hours of the morning, and in a bad year many boats will fail to finish in the permitted time.

Competitors need to judge the wind and tide on all three rivers. Everyone is fighting against the tide at some point. At times boats are travelling at breathtaking speed, and at others drifting painfully, sometimes backwards if the wind is light and the tide strong. If a lot of competitors choose the same route, there can be congestion and collisions at narrow points. Bewildered holidaymakers in hired motor cruisers add to the challenge. When the wind drops at night, some will anchor and wait for dawn, while others will try to carry on, lowering and raising masts by torchlight, or the moon if they are lucky.

Unlike conventional sailing races, the Three Rivers provides a variety of kinds of sailing. There is fast open water on Hickling Broad, and on parts of the lower Bure with a favourable wind. But the river Ant, and the Fleet Dyke are narrow and winding, and prone to congestion and collision. To complete the course, boats have to pass twice under three bridges where masts must be lowered and raised at speed.

Potter Heigham presents the challenge of two bridges. The old bridge is very low, and only wide enough for one boat, and if boats get spread out in the race, there may be competitors trying to go through in both directions at the same time. Most boats tie up briefly to lower their masts, and then have to paddle doggedly to pull their boat through: especially difficult if they have misjudged the tide, which can be strong through the narrow channel. Others, with more skill, or foolhardiness, sail fast towards the bridge, dropping the mast at the last minute and hoping to glide through with the momentum. Get that wrong and you lose your mast, and are out of the race (and seriously out of pocket). The food and drink shops in Potter Heigham all do a good trade out of spectators, and the bridge is a favourite spot to receive helpful advice from onlookers.

Ludham Bridge on the River Ant is a favourite spectator point. Navigating the mile up and back down the very narrow and winding river is difficult in normal circumstances, but doing so in a crowd of other boats is a real test of seamanship. Occasionally boats misjudge the turn, and run up the bank into picnickers, who have to be deterred from “helping” by pushing them off again (help from the bank disqualifies the boat).

The peak of the season

For a century, the Norfolk Broads have attracted boating enthusiasts of all ages. Alongside the rural peace, wildlife, and waterside pubs, they offer sailors a unique variety of kinds of sailing.

For sailors the Three Rivers is the highlight of their year: a great test of fitness, stamina and skill. For them, and for the bankside spectators, there is nothing like it anywhere in Europe.

More about the River Bure 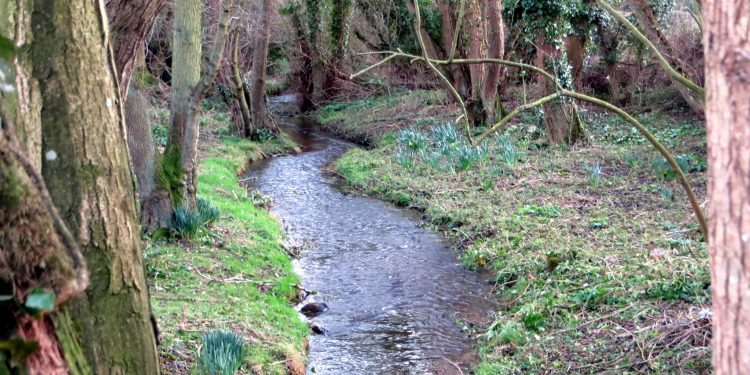