Norwich has the only elections in Norfolk this year (apart from one byelection in South Norfolk). Can Labour and Greens make up before the general election? The answer is probably no. 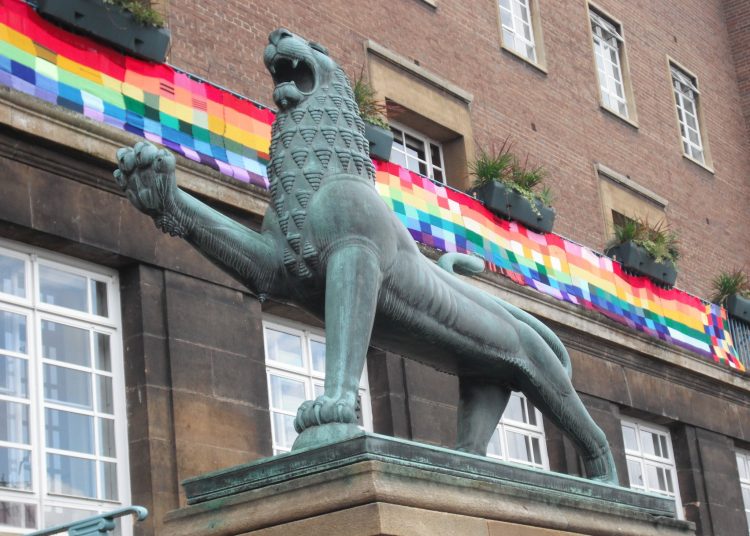 One of the iconic lions in front of Norwich City Hall. Photo by Jacq Applebee on Flickr (CC BY-NC-ND 2.0)

The main interest in the Norwich City Council elections lies in what clues they can give as to what might happen in the general election. The council is unusual, in that it is held by Labour with Greens as the opposition and the Tories nowhere.

Currently, the council is made up of 26 Labour, 10 Greens and three Liberal Democrats, with no Conservatives. A third of the 39 seats are contested this year, with nine presently held by Labour. The Greens have made gains in recent years and are known to have their eyes on Sewell ward. The Tories, in looking for a way back, are believed to be concentrating on Carlton Grove and Crome.

There is evidence that the Tory cause is proving unpalatable on the doorstep. Partygate and the cost of living are going down badly, but there is also a particular local issue which has inflamed voters. The decision by Norfolk County Council not to provide free meal vouchers for the most vulnerable children over Easter seems to have infuriated the public. So the Tories won’t be expecting a local government renaissance here. In fact, it is unlikely that we will see many changes in the make-up of the new council.

What can next month’s vote tell us about a general election?

For many, these elections are a foretaste of a general election, particularly in Tory-held Norwich North. Proposed boundary changes make it difficult for the Tories, since under present plans Thorpe Hamlet becomes part of the constituency. There is little Tory support there, and although in local elections the Greens hold a strong majority, in a general election many of those votes may turn Labour.

There are also demographic changes which work against them. Sprowston’s growth in the north has seen many voters move there out of the city, specifically from the Norwich ‘Golden Triangle’ (the city’s own Notting Hill). The area is made up of young professionals and students from the University of East Anglia. As they begin a family they look for something bigger they can afford, and Sprowston is proving popular. They are not natural Tories, and with Thorpe Hamlet the trend would put Norwich North on a knife edge.

The outcome may depend on whether Labour and the Greens can come to an accommodation on a progressive alliance. That would require the Greens not to put up a candidate, or at least not to campaign for them. (A nuanced difference, but standing a candidate even if you don’t campaign for them satisfies parties’ sense of amour propre.)

Will Corbynists prove the block on a progressive alliance?

This scenario seems unlikely. Given the Greens provide the opposition to Labour on the city council, they are unlikely to entertain a sudden volte face, backing down for them at the general election. But there may also be something else at work here, harking back to the vicious infighting within Labour during and after the time Corbyn was leader.

Many of these former Labour members, it is said, have found a natural new home in the Greens. There is evidence that this has particularly been the case in Norwich. (A brief trawl through a Green’s website will find enough references to socialism and anarcho-syndicalism to make the point.) So Corbyn’s supporters have left Labour to its treachery and moved to a brave new world where they can more easily practice their ideology.

Can Labour win a general election without the help of the Greens?

It is difficult to know quite how many there are in this group, or to judge the influence they may have over a progressive alliance, since in spite of a number of attempts and broken appointments it has proved impossible to discuss the issue with the Greens at any level. Whether this is down to diligent 24-hour campaigning or a reluctance to talk to the press is difficult to say.

A refusal to agree to stand down for Labour in the general election in Norwich North seems, on what is known, to be probable. Such a decision however might cost the Greens dear, if it means the Tories hold on to the seat through a split progressive vote. Centre-left voters are unlikely to forget.

But a failure to achieve a progressive alliance does not mean Chloe Smith is safe in Norwich North. Apart from the demographic and boundary changes outlined above, voters have a habit of making their own minds up where to put their cross, and recent elections across the country have suggested that they know how tactical voting works, with or without a progressive alliance.

In the city council elections the two main parties here will probably fight each other to a standstill. But nobody is under any illusion as to where the major battleground lies.