Now is the winter that our Brexit sent

Woodbridge residents vent their anger at Brexit on Suffolk for Europe's Brexitometer as food and fuel shortages take their toll. 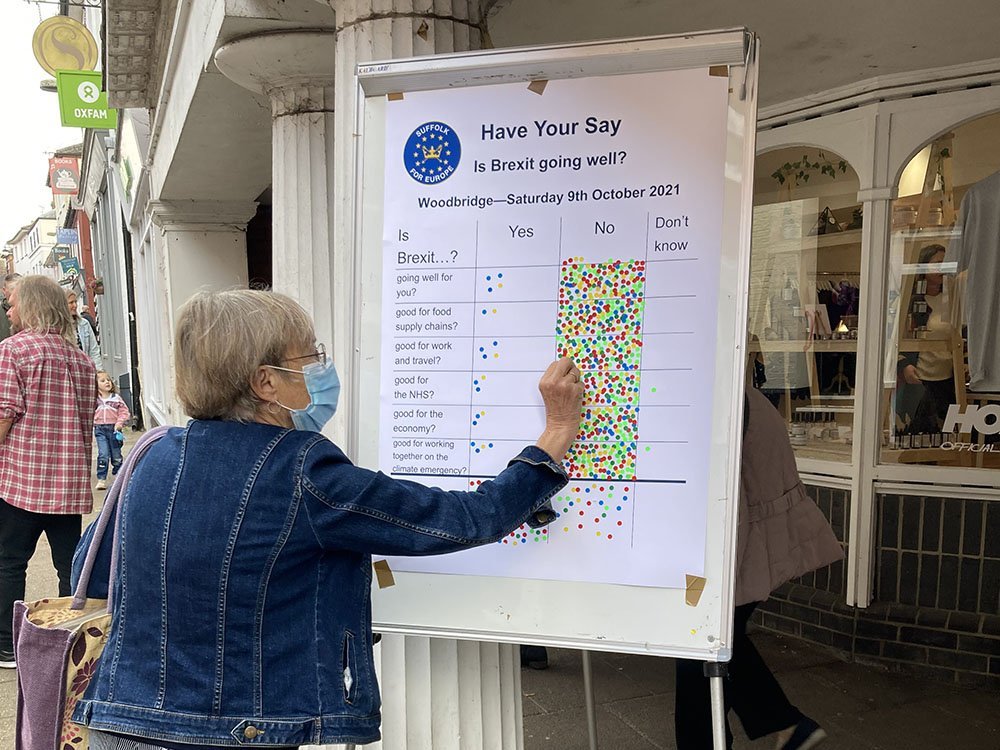 The residents of Woodbridge are angry and they were keen to make their feelings known today.

Woodbridge is a small market town in the heart of Work and Pensions Minister Thérèse Coffey’s Suffolk Coastal constituency. In the 2019 General Election she increased her majority to more than 50 percent of the vote.

Today, Suffolk for Europe (SfE) held their first street stall in the town since the election. They always set up on The Thoroughfare – the main shopping street at the heart of the town. In the past, they used to decorate the area around the stall with EU flags and People’s Vote posters. This time, it was bare – a rather downbeat affair they hoped would encourage more Leave voters to engage with them.

The Suffolk group are old hands at street stalls, having run them on a regular basis in a number of Suffolk towns between the 2016 referendum and the 2019 General Election. It is an opportunity for volunteers to hand out leaflets and sign up locals to SfE email updates.

Over time, the stalls evolved to include a ‘Brexitometer’. This is an interactive chart with questions about Brexit, inviting members of the public to place sticky dots next to the answers that most reflect their views. On a Saturday morning, they could always count on coaxing a steady stream of people to come over and stick their dots on the chart.

It has been two years since the last time they held one. It was becoming clear by then that ‘Brexit fatigue’ had become A Thing. Between Brexit dominating the news and the deadlock in parliament, many people were fed up hearing about it. It is why Boris Johnson’s ‘Get Brexit Done’ was such an effective campaign.

It has since become evident that what was cynically termed ‘Project Fear’ by the Leave campaign has started to become ‘Project Here’. A desperate labour shortage caused by hundreds of thousands of EU citizens leaving the country has broken vital links in our supply chains. From HGV and tanker drivers to butchers to agriculture workers: its effects are touching us all.

It’s all a bit reminiscent of the 1970’s shortages and rising prices; a time which many who voted to Leave apparently regard as the halcyon days.

Some are feeling the effect more acutely. Suffolk is one of the largest pig producing regions in the country. Around here, you can’t drive more than a few miles without seeing piggeries, with large fields full of curved corrugated huts. As a result of a shortage of butchers in pork plants, farmers are facing the prospect of having to cull healthy animals. The National Pig Association believes the number could be as high as 120,000. The cost to farmers will be immense.

Similarly, turkey farmers across the region can’t find enough pluckers. The government’s new visa scheme has come too late for them, as farmers had already scaled back the number of birds. Kate Martin, chair of the Traditional Farm-Fresh Turkey Association, said this will lead to a likely shortage at Christmas. It’s a gap that EU farmers have promised to fill (£), at great cost to our own.

Nearer to home in Woodbridge, the local Co-op regularly runs out of things it never used to. Local bus services are being cancelled due to drivers leaving to take more lucrative HGV jobs now it’s paying so well. And the petrol station in neighbouring Melton had no fuel for days. A Facebook group has been set up to help Suffolk residents find fuel for their vehicles. These problems are affecting us all. Most recognise that Brexit is a major factor in all these issues.

It was perhaps not a surprise, then, that as Suffolk for Europe set up their street stall, they had barely got the chart up when people were literally lining up to ‘have their say’ on the Woodbridge Brexitometer. What in the past had been a steady trickle of people was a flood. People were angry and needed to vent. Volunteers at the stall listened to their complaints and agreed with them.

What was particularly interesting was the marked difference in the behaviour of Leave voters. In the past, they used to stride up to the Brexitometer. With an air of defiance, they would place their dots to say, ‘no they don’t want another referendum’ and ‘yes, Brexit would be good for jobs in Suffolk’. This time virtually none did. There were a few glares and perfunctory “no”s when volunteers invited them over. Their non-participation was illuminating and perhaps suggests they’re more unhappy about Brexit than they’re ready to admit.

There were some notable exceptions. One woman in her 40s came over with her elderly father. She was upset about Brexit and wanted to add her dots but warned her father would put them in the opposite boxes to her. It led to an interesting discussion between them. Perhaps they had played safe and avoided the topic – in many other families, the discussion of Brexit had led to a rift’.

It turned out that yes, he had voted Leave. But now he was now angry as Brexit was nothing like what had been promised. In the end, to the delight of his daughter, he put his dots in the same boxes as hers.

Another was an elderly couple who’d also voted Leave. They were furious at the state of the country, with all the shortages. It wasn’t, they said, what Vote Leave had promised. There were particularly aggrieved over the lack of £350 million a week promised for the NHS. They were too upset to add their dots – a public admission they had made a mistake, – but they privately said if they could go back, they’d vote Remain.

Brexit – the mood in the country is changing

There is a sea-change in feeling towards Brexit. It was clear today from the results of the Woodbridge Brexitometer. This week’s Question Time showed a supposedly ‘balanced’ audience highly critical of the government, and of Brexit. Many Remainers have reported a tail-off in online trolling by Leave voters.

Meanwhile, government messaging over the supply chain issues has gone from ‘it’s not due to Brexit’ to ‘it was always the plan’. It can only mean they expect things to get worse and they’re now in damage limitation mode.

If critical shortages continue into the Christmas period, we could we be heading for a 70’s-style winter of discontent, and not just amongst Remain voters.