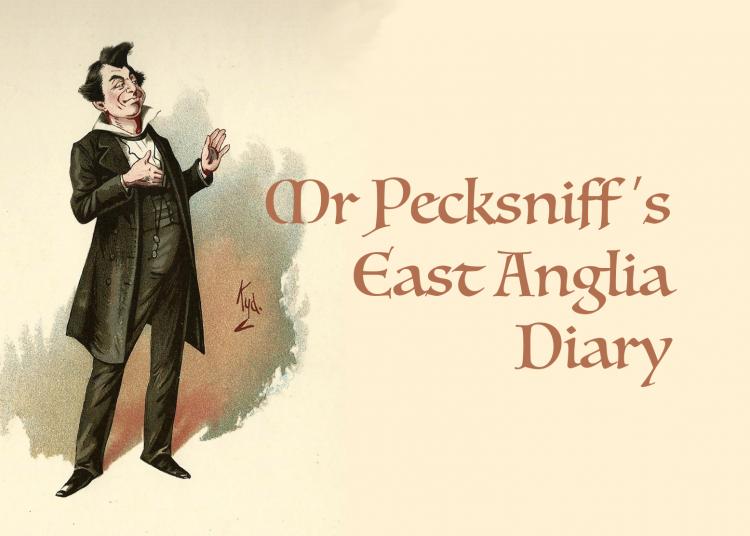 The local elections may not have amounted to much in the scheme of things, but they have provided a pointer to the thinking, or sometimes the lack of it, among our great British electorate. Whole swathes of the East of England didn’t even have an election not to be arsed to vote in. My colleague Stephen McNair has written a full analysis.

But among the highlights was Colchester Tories losing control of the council. The Colchester Gazette writes that “Conservative MP Will Quince said he had been at a wedding prior to the count, but it was instead alarm bells which were ringing in his ears throughout the evening.”

The move against the Tories may put Mr Quince’s parliamentary seat in jeopardy. Afterwards the formerly arch Johnson loyalist remarked: “We are going to have to go out and listen to people and understand why they voted the way they did. Some of the reasoning will be on national issues, some local, and we need to reflect and look at where we need to change.”

“Depend upon it, sir,” Samuel Johnson observed: “When a man knows he is to be hanged in a fortnight, it concentrates his mind wonderfully.”

In fact, there was more bad feeling than usual in the Colchester contest. It is not unusual for canvassers to pinch each other’s leaflets or to knock down the occasional opponent’s garden placard. Then last year, Liberal Democrat posters were removed from private property by a council official. The party has not forgotten. To mis-quote PG Wodehouse: “It is rarely difficult to spot the difference between a ray of sunshine and a Liberal Democrat with a grievance”.

So, this year the Liberal Democrats have hit the Tories with a barrage of complaints about inaccurate claims in their literature, refusal to admit they are actually Tories in their literature, disputed poster sites, illegally doctoring Liberal Democrat literature for improper use on social media, improper political pressure, unnecessary involvement of council officers, dishonest observations, bullying and intimidation. (It is also suspected that Colchester Tories never stand their round, though to put that into print would be going too far.)

Much of this may be true, but all this acrimony can’t be good for politics. The good people of Colchester, like many others around the region, can only hope that, beyond the hubris and the backbiting between the parties, the voters of Colchester will be spared an occasional thought.

A small point. Rural Norfolk’s only election was at Mulbarton and Stoke Holy Cross. The Eastern Daily Press reminds us that, last year, the Tory candidate Nigel Legg objected to the building of affordable homes locally because they would attract “feral youths” who are “unlikely to vote for us”.

Mr Legg was not due for re-election this year, but his observation might not have helped his Tory colleague. The Liberal Democrats took the seat.

This week’s blatant absurdity from Nadine Dorries (Mid Beds) concerns the attempt to smear Keir Starmer for being guilty of his own Partygate scandal, by showing him sharing a curry with (the half obliterated) Frank Dobson. Unfortunately for our inept conspirator, that’s actually the late Frank Dobson. The great man died in 2019, well before the Covid lockdown. The picture has been deliberately cropped and misrepresented. Ms Dorries is complicit in a deliberate and untrue smear against the leader of the opposition, but frankly doesn’t care. Next week there will be another one.

The most depressing thing about having to write about Ms Dorries every week is that, among the many whisperers and eavesdroppers who keep Pecksniff informed, not one of them is from her constituency.

Adrian Ramsay is joint leader of the Green Party and Green candidate for the new North Suffolk constituency, always supposing the boundary changes go according to plan. In a TV interview on Sky this week, he confirmed that the party would like to leave NATO, but not until the Ukraine war is over.

It sometimes seems the Greens still have some way to go before they can be taken seriously as a political party. The announcement shows that it is still in the grip of ideologues. It is not a matter of whether NATO is A Good Thing or not; his statement sounds unprincipled and makes no logical sense.

If we remain in NATO, that is because it is judged safer to do so. Then after they save our bacon, we leave. Principles apart, that does sound rather like being awfully grateful when the roof fell in that the house was insured, but once the insurers have shown the wisdom of your foresight by coughing up for repairs, you cancel the insurance.

Why can’t our Greens be sensible, rational people as in Germany? Is this another example of British exceptionalism? After all, the Greens have had decades to make their mark against what has been at best indifferent political opposition, they represent absolutely the most pressing concerns, and yet they still only have one MP, (impressive though she may be). What on earth have they been doing? But then, when all the other major UK parties are sclerotic and inept, it must be difficult trying to buck the trend.

It seems there is a hoo-ha involving Ipswich MP Tom Hunt, who has called in the rozzers and complained about “malicious communication” on Facebook. Some bloke called Spotted in Ipswich was halfway through his cornflakes when five of Suffolk Constabulary’s finest turned up on his doorstep to arrest him. Then they went off once it was explained that our man Spotted was being satirical. He has apparently heard no more, so presumably satire is allowed.

Pecksniff has not been aware of Mr Spotted’s online endeavours before, so cannot comment on his style. But it raises interesting questions. Did Mr Hunt not realise it was satirical? Or didn’t he care? If he did know it was satirical, why didn’t he tell the police? Or if he did tell the police, why did they send five officers to Mr Spotted’s door if satire is allowed?

Or was it just that Mr Hunt is an MP and therefore an Important Man, not to be mocked? I mean, five policemen? Really? Did they fear he might lampoon their lawful authority? Provoke them with his persiflage?

In a coincidence entirely unconnected to this incident, last week Mr Hunt spent a day canvassing in the local elections in Ipswich. Among other Tory canvassers that day was Tim Passmore, the Tory Police and Crime Commissioner for Suffolk, an event happily recorded and shown on Twitter by the Tory leader of the county council, Matthew Hicks.

Nadia Cenci is the notorious former leader of the Tory group on Ipswich Borough Council, who yesterday lost one of the two seats Labour won. But she is defiant. On radio she described keeping Boris Johnson as her PM as “the hill I’ll die on”.

The Tories reportedly used all kinds of tricks during the election. Here is one which seems to have been common – this from La Cenci herself – declaring she will do something about potholes. But the thing is, this was a borough election, and potholes are the responsibility of the county. And the county is run by the Tories.

A reader writes in desperation over a serious school transport problem. She is a single mother living in Suffolk and has just moved house, 350 yards from her previous home. But now she is told her son no longer qualifies for free school buses. He still has a place at his existing school, but since she can’t afford the bus fare of £250 per term, he has no means of getting there.

She appealed two weeks ago to both her MP, Dr Dan Poulter (Central Suffolk) and to her county council representative Councillor Elaine Bryce. Neither had even acknowledged her. So Pecksniff had a go. As is the way of things these days whenever trying to speak to a Tory over something he or she is supposed to be responsible for, there was no reply. Pecksniff left a message on Dr Poulter’s Westminster number, and on Councillor Bryce’s mobile.

That was three days ago. There has been no response. Has nobody in Dr Poulter’s office even bothered to listen to his messages? A fine commentary on how seriously he takes his constituency. Has Councillor Bryce really not used her mobile phone for three days? A distressed young mother has no idea how she will manage to get her child to school, with a deadline for her appeal next week, and Councillor Bryce can’t be bothered even to make a phone call?

Now, there are worse Tories about than Dr ‘Three Jobs’ Poulter. Councillor Bryce presently wallows in anonymity, so there is little to know about her. Pecksniff is not one to bear a grudge [Oh yes he is! – Ed.], but for this monstrous and to the family deeply distressing situation to be ignored by those whose job it is to help is enough to ruffle a gentleman’s cravat. Be sure, unless this problem is swiftly resolved, readers will hear much more about Dr Poulter and Councillor Bryce.

Special thanks this week go to Chewie.