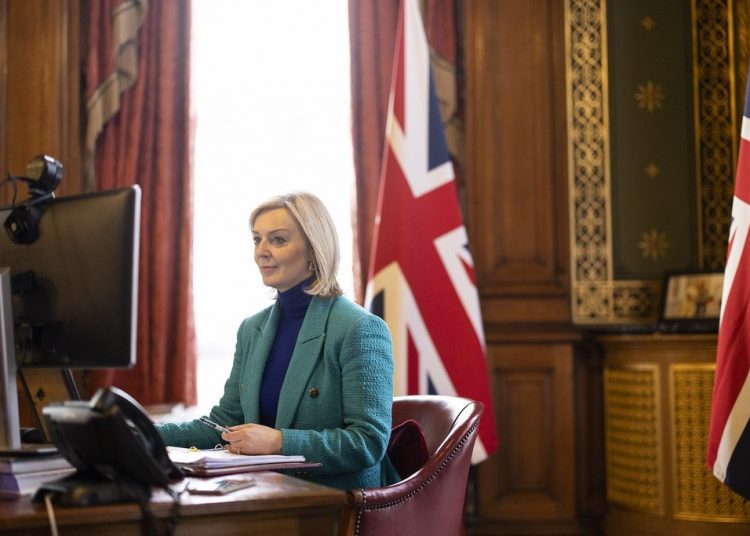 Welcome to a special Christmas edition of Pecksniff, full of bumper fun and all your favourite wacky MP characters from around the region. Where to start in a tumultuous week? Since implausibility seems to be the leitmotif of much of politics these days, tales of Boris Johnson’s possible successors seem appropriate.

“Priti Patel is ready to replace Boris Johnson as prime minister,” the press proclaims. “Liz Truss has donors lined up,” shouts another. As Johnson flounders, East Anglian MPs are only too keen to fill his boots, (if that doesn’t sound too much like an indecent metaphor). Delicacy requires a warning at this point to those with weak bladders and no immediate access to a change of nether garments… It really does seem that Tory members, presumably in their thousands, may see one of these ladies as being a natural successor to Disraeli, Churchill and MacMillan.

Both have been busy preening themselves for those oh-so important publicity pictures following Johnson’s defenestration. Cruella de Witham has been photographed apparently emerging triumphant from a medieval doom painting, having cheated death and still wearing that smirk which suggests she has just eaten next door’s poodle.

Liz Truss has been spending a great deal of our money on being photographed, often in exotic locations, in an attempt to give her gravitas. But somebody should tell Ms Truss she is not suited to gravitas. She wears the same frozen expression of alarm and confusion which so many unfortunate women probably wore when sitting next to Boris Johnson at dinner and feeling a hand under the table.

But there is a third contender from our region. Yes, it’s Mr Phoenix himself, Matt Hancock (Conservative, West Suffolk). Not content with squandering tens of billions of our money on largesse to Tory donors while the British public died in their tens of thousands, forgetful of the breach of his own rules (and his marriage vows) which led to his resignation in disgrace, and ignoring this week’s revelation that he was present for at least one of the notorious Downing Street parties, the boy Matt is also up for it.

Even among Tory MPs, Hancock’s overweening self-belief and titanic ambition is remarkable. Pecksniff has reported in recent weeks his abortive attempt to become something in the United Nations, then there was his attempt at blagging a book contract explaining how he single-handedly saved civilisation. He is relentless at pursuing his friends in the media. “Close friends of Matt Hancock claim” means Hancock. “Sources report a book deal” means Hancock. Make no mistake, the People’s Partridge is up for it again. Reluctant TV crews are trotted out to show our hero receiving his booster jab, press snappers are strong-armed into picturing him dressed coolly all in black, his new look. His people need him, he declares. The boy is back in town.

What fun it would be were somebody to tip off Pecksniff as to one of Hancock’s as yet undiscovered indiscretions.

On the subject of Tory donors, a colleague passes on an interesting snippet over a pint of Messrs Adnams’ finest. It seems that in August 2020, Bateman Groundworks of Norwich received £1.8 million in loans from the public purse to help see them through the pandemic. While the loans are arranged and made by banks, the government guarantees them and also pays the first year’s interest and loan fees, which amounts to state aid. The portion falling into that category amounted to £186,120.

But the same month, Bateman donated £4,500 to Great Yarmouth MP Brandon Lewis (Conservative), then went on to give him a further £18,000. The company’s managing director, Richard Bateman, told the Guardian the loan was “fully guaranteed and secured against both company and personal assets” and that it was “not a taxpayer-backed loan. The loan was in no way used to fund the Conservative Party generally or any individual member of the party”.

Well yes … Nobody is claiming that Batemans trousered the moolah then biked straight round to Lewis with the public’s money wrapped in a brown envelope. But it’s doubtful whether the public would share Mr Bateman’s interpretation of the facts. Nor would they greet with equanimity the wider realisation that Brandon Lewis has already trousered rather a lot of – shall we say – ‘controversial’ money through his Russian connections.

Historically East Anglia has held a prominent if unlikely role in previous attempts at revolution, but it may be time for another. (Hopefully with a more successful outcome. Previous attempts have led to an awful lot of people losing their heads. We East Anglians have long memories.) But Pecksniff has his spies everywhere, fine upstanding men and women and most of them sober. So two tales from over last weekend seemed straws in the wind, given what happened a few days later in North Shropshire. Passengers on a train through Essex to London were almost all wearing masks – itself a fact worthy of a headline in the Essex Chronicle. But to the astonishment of Pecksniff’s informant, a general conversation sprung up around the carriage as to just exactly how corrupt the present government is, and (this being Essex) which parts of Johnson’s anatomy should first feel the effects of their anger.

Meanwhile, in Kings Lynn that town’s finest had put up a street stall to gather signatures on a petition to renew the local hospital which, as this august chronicle has previously reported, is falling apart. But the public also had other things on their minds. Shock at the government’s indifference to their plight quickly spilled over into “one rule for them and another for us”. The stall became an impromptu protest meeting. Life-long Tory voters expressed their disgust, with one declaring that he “won’t vote for the party with that lying buffoon in charge”.

It is a curiosity that card-carrying Tories seem to live in a parallel universe, a tendency which reaches its apogee in their MPs. They see the same things, hear the same things, yet draw entirely different conclusions. So the headbanger tendency in the Commons this week voted against its own party whip on covid passports. The public are in favour of greater restrictions by three to one, but Tory MPs seem to want to get rid of them all, in the name of the people. This led to a curious result across East Anglia. Those on the government pay roll, cabinet members and other ministers, dutifully trotted out whatever they were told by the whips and followed the party line. Almost all those who weren’t, the backbenchers, voted against.

As the North Shropshire by-election approached, one poll suggested the Tories could expect to lose 133 seats. That would certainly include Colchester, Ipswich, Norwich North and Peterborough. But then came the by-election itself, and an extraordinary 34 percent swing from Tories to the Liberal Democrats. Labour’s attempts to spoil the party came to nothing – the LibDems were first out of the blocks and were parading their candidate in Oswestry high street almost within minutes of former MP Paterson’s resignation.

This is relevant to East Anglia because almost every LibDem in our area seems to have travelled there to play a part. Whatever happened to the shuffle of sandals and the earnest motions about the need to be nice to people? These days they have about them the fervour and the rictus smiles of Jehovah’s Witnesses. Pecksniff has the gravest doubts about our present political parties, but a hat tip to the LibDems seems to be in order, not least those across East Anglia who were part of that triumph. This week they have done the country a huge service.

And while we pore over North Shropshire and its entrails, there is a rumour going around that one of those entrails, the appalling Owen Paterson, has not been entirely absent from the by-election to replace him. It is said to be well known among the farming community, even here in East Anglia, that he rather took the view that Johnson had thrown him under a tractor by his about-turn on parliamentary procedures. Consequently, so goes the rumour, in his fervent discussions with close farming contacts he was not entirely supportive of the Tory candidate chosen to replace him.

The feeling is – and those who might cavil at the idea that the Tory party can be completely barking might like to contemplate this – that he can return as something of a prodigal son, re-selected to fight the next election and return to the Commons in triumph, (and sleaze).

Excepting the last part, the rumour seems plausible. But even so and allowing for Paterson’s being not exactly the sharpest pencil in the box, his hopes of a return do stretch credulity. Still, as we have already read in this column, that seems to apply to so much within the Tory party these days.