In Churchill's Zurich speech he suggested the formation of a 'United States of Europe'-without the UK-and advocated for a Council of Europe. 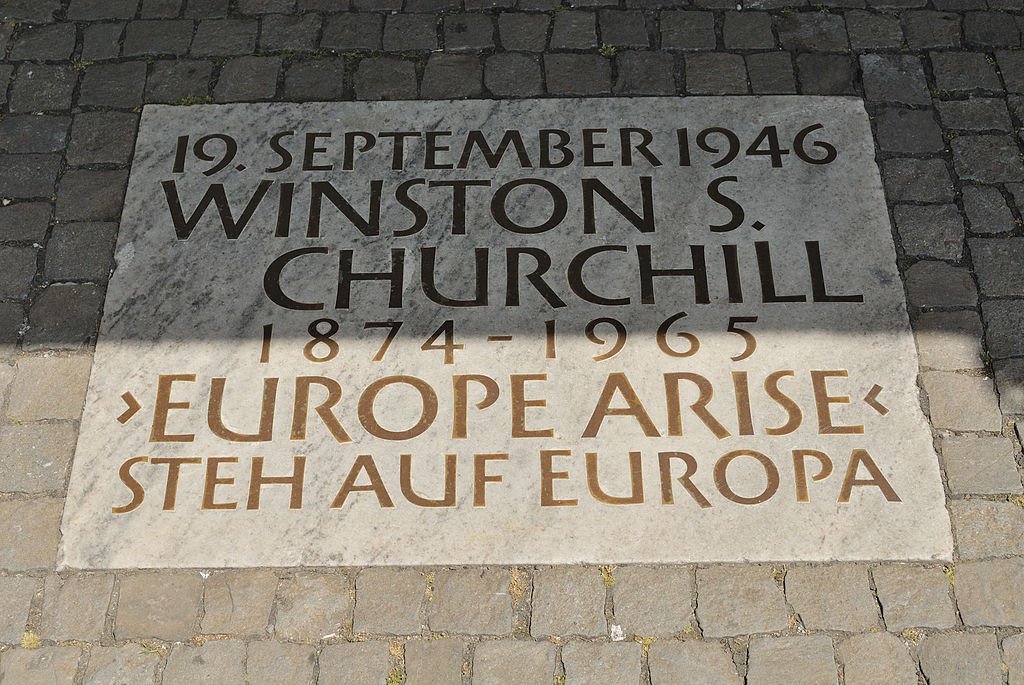 “If we are to form the United States of Europe or whatever name or form it may take, we must begin now…” explained Winston Churchill, in his famous Zurich speech on the 19th September 1946, 75 years ago today.

The speech is often used to show that Churchill, supposedly a great hero and role model for our current Prime Minister, was hugely in favour of our integration into what would become the European Union. Indeed there is much in the speech that supports the idea that he was the inventer and architect of the various institutions that came to birth over the next fifty years, and the idea of agreements designed to eliminate competition, break down borders and replace threats of war with a multilateral commitment to peace.

A UK outside Europe

But when it comes to the place of the UK in all this, things are not that simple. If we look more closely at Churchill’s famous “United States of Europe” speech, we can see that he envisaged that such a body would be “them” without “us”. This is because the UK already had its existing alliances and longstanding relationships with many parts of the world outside Europe. Churchill was Leader of the Opposition at the time. His idea was that Europe would be the stronger, and more capable of resisting external threats, if the UK’s global influence was matched by a stable bloc of European countries on the mainland continent—a sort of united states of the parts of Western Europe not behind the Iron Curtain.

Here is what he says about Britain’s membership of a different bloc, and the desire to have this matched by, but not integrated with, a European bloc or grouping—a group of those who speak a variety of languages other than English:

There is already a natural grouping in the Western Hemisphere. We British have our own Commonwealth of Nations. These do not weaken, on the contrary they strengthen, the world organisation. They are in fact its main support. And why should there not be a European group which could give a sense of enlarged patriotism and common citizenship to the distracted peoples of this mighty continent? And why should it not take its rightful place with other great groupings and help to shape the honourable destiny of man? In order that this may be accomplished there must be an act of faith in which the millions of families speaking many languages must consciously take part.

Surveying the tragedy of a war-torn and devastated continent, Churchill concluded that the key thing was to replace competition between France and Germany with collaboration. His speech concludes with these words:

In this urgent work France and Germany must take the lead together. Great Britain, the British Commonwealth of Nations, mighty America — and, I trust, Soviet Russia, for then indeed all would be well — must be the friends and sponsors of the new Europe and must champion its right to live. Therefore I say to you “Let Europe arise!”.

No place for Britain

In this conclusion we can see almost explicit what is implicit earlier in the speech: that the federal Europe that he has in mind is supported by, but does not include, Britain, the British Commonwealth or the USA; and that it is to be born out of a collaboration between France and Germany, along with whatever other states are initially willing to join in, with each nation having an equal say no matter how small or large, and no matter how poor or wealthy, it is:

Small nations will count as much as large ones and gain their honour by a contribution to the common cause.

A ‘United States of Europe’

Clearly what Churchill was imagining was very much like what would eventually become the EEC, which was indeed founded on the building blocks of collaboration between France and Germany. Precisely because of the influence of France under De Gaulle, the EEC went on to veto Britain’s application for membership twice in the 1960s.

People sometimes also try to award Churchill the prize for having instigated something else—arguably something quite different, quite unrelated to the common market: something to which we belonged from the start and to which, thankfully, we still very much belong and should belong. And that is the Council of Europe. But is it right to attribute that body to Winston Churchill or to the leadership of the UK?

For sure when Churchill sums up his proposal in the Zurich speech, he says this:

The first practical step will be to form a Council of Europe. If at first all the States of Europe are not willing or able to join a union we must nevertheless proceed to assemble and combine those who will and who can.

In other words he proposes, in these very terms, a “Council of Europe”. But what he had in mind was a Europe-wide congress to form and initiate his “United States in Europe”.

As things transpired, a Council of Europe was set up in 1949, under the auspices of the European Movement (founded in 1948); but it was too soon to embark on the processes required to move to unified policies on trade and competition. Instead the Council of Europe took, and takes, as its remit not the unification of Europe as a political or economic bloc, but the establishment of legal constraints on members to prevent any repetition of the atrocities that Europe had witnessed under the Nazi regime.

It invited, and invites, European states to commit to upholding high standards of respect for the Rule of Law, to ensure that Europe would never again be at risk of the kind of human rights abuses seen in the Holocaust. And to make that a reality, in 1959, it brought into being a legal mechanism and a transnational court, along with the European Convention on Human Rights, which lists the rights that member states undertake to ensure for their citizens and non-citizen residents.

Britain is, naturally, still a member of the Council of Europe, of which it was one of the founding members. We are still a signatory of the European Convention on Human Rights (ECHR) which guarantees, among other things, our right to life, to a fair trial, to freedom of thought and religion and to peaceful assembly and to form trade unions; and it prohibits torture, enslavement and discrimination.

The more our government withdraws from the other institutions designed to defend and extend the post-war European peace project. the more it becomes apparent how much we should value the Council of Europe, and the European Court of Human Rights, as a means of protection from our own government, should our government become the source of our miseries.

At the ECHR in Strasbourg, we as individual citizens can take our own government to court. We can have infringements of our rights tried before an international court. The Court has the power to enforce its international standards of integrity and protection of our basic freedoms. This is one of our most precious resources; so any government that resents its power is probably already on the slippery slope to evil.

CoE is a guarantor of our democracy

We should be aware, and wary, of any rhetoric that suggests that this international court is an infringement of our sovereignty. Actually it is the guarantor of our own democracy and freedoms, and it will protect our constitution from changes that would undermine British democracy. It’s been used successfully against failings in the UK on a number of occasions in the past.

Why did we sign up to the Council of Europe? Why do 47 countries still belong and uphold its treaties? As Churchill looked at the devastation in the aftermath of World War 2 he noted:

In this last struggle crimes and massacres have been committed for which there is no parallel since the Mongol invasion of the 13th century, no equal at any time in human history. The guilty must be punished. Germany must be deprived of the power to rearm and make another aggressive war. But when all this has been done, as it will be done, as it is being done, there must be an end to retribution. There must be what Mr Gladstone many years ago called a “blessed act of oblivion”. We must all turn our backs upon the horrors of the past and look to the future.

“Turning our backs on the horrors of the past” does not mean denying their existence, nor denying their shamefulness. Rather it means doing everything possible to ensure that they are and remain only ever in the past, and never in the present or the future. That is what the Council of Europe is there to ensure.

Human rights must not be undermined

As memories fade, unscrupulous countries pass laws that threaten the democratic rights of their citizens or of minority groups, withdraw the right to peaceful assembly, question the right to life and to asylum, or add measures that increase discrimination. We therefore need to know that there is still a strong international legal system with sufficient teeth to uphold the high ideals expressed in the ECHR.

Indeed, the more a government or political party begins to think that it would like to be free of such scrutiny, the more our alarm bells should begin to ring. There may be bills passing through the Westminster Parliament as I write that sorely need to be tested at what is arguably Europe’s best and most effective institution: the Council of Europe that was set up precisely to preserve us from those things.

It is one vital pan-European institution from which we must never even contemplate withdrawal.

Professor Catherine Rowett currently holds a teaching and research position in philosophy at the University of East Anglia. From May 2019 to January 2020 she served as Green Party MEP for the East of England, participated in debates and votes concerning Brexit and the European Green deal, and oversaw files on freight transport and aviation. Catherine is currently Green Party spokesperson for work, employment and social security, and deputy coordinator of the Eastern Region Green Party. She lives in Norwich.