The absence of aliens from Rendlesham Forest, and elsewhere in our galaxy, suggests humans could be a unique quirk as intelligent species go. 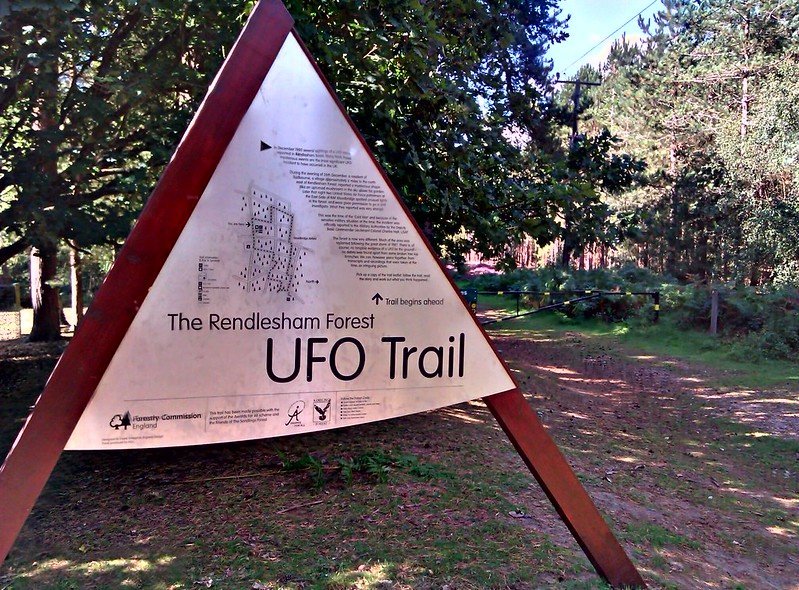 Searching for UFOs in Rendlesham Forest. Photo by mjuk on Flickr (CC BY 2.0)

The most amazing thing happened to me the other day. I was driving through Rendlesham Forest, just north of where I live in Suffolk, when this bright light appeared above me. This gleaming, saucer-shaped object descended, and these pale, spindly beings got out.

We would be invited to join the Galactic Union, with immeasurable benefits to all mankind. I would be instrumental in bringing this about. But first, they had to carry out certain intimate examinations. Still, they would bring us Great Cargo…

We have all heard the stories. The area around Rendlesham appears to feature heavily.

There is an American rock band called the Foo Fighters. They get their name from a phenomenon first recorded by US aircraft at the end of the Second World War. They saw planes with apparent burning lights at the tail end that appeared to propel them forward. The word “Foo” is probably a corruption of the French “Feu”, so “fire fighters”.

There were any number of experimental Nazi aircraft being tested using primitive jet engines at that time. Let’s have a look at this one.

These would have looked like something out of the future to fliers in conventional aircraft. There is, as far as I know, no record of UFOs before this time, which is significant. The conclusion is obvious enough. But the legend, like the Yeti, Bigfoot, whatever, was established. Any other sightings of anything odd, a weather balloon, an unusual cloud formation, was down to “UFOs”. The truth is out there…

Let’s take a (heavily) scientific look at why there are no alien saucers circling over Rendlesham. The Swiss psychologist Carl Jung, who was wrong on most things, thought UFOs were a modern myth, the foundation of a modern religion.

To understand why there are no UFOs over Rendlesham we have to look first at the Fermi Paradox. Enrico Fermi was an Italian-American physicist who worked on the US nuclear bomb and the first nuclear reactor. He is best known for that Paradox, on the search for extra-terrestrial intelligence (SETI).

The exact quote, in 1950, is barely remembered. It’s generally rendered thus. “It is not a question of, is anyone out there? It is more, where is everyone?”

Fermi meant that the building blocks of terrestrial life are so common that it seems inexplicable that this does not exist elsewhere in our Solar System, or elsewhere. Carbon, hydrogen, oxygen, nitrogen, the so-called CHON building blocks of life, plus energy. Yet there is no evidence that such life exists.

We now know the Paradox is even more pronounced. As Fermi spoke, some astronomers believed our system might be the only one containing planets. We now know they are everywhere we look, in the home galaxy and beyond.

Estimates vary, but there may be one hundred to four hundred billion stars, depending on how you define a star, in that home galaxy. Not a sign of life. It is worth analysing why, and why those UFOs are not circling over Rendlesham.

There are three interlocking theories here, the Great Filter theory, the Three-Legged Cat and the Peacock’s Tail. (The first is well known, the second and third are my own explanation of the available theoretical data. Bear with me, if you will.)

The Great Filter: In The Beginning, There Was The Slime. Archaea are unbelievably primitive organisms – to liken them to slime is to liken the moss on your garden path to the Amazonian rainforest. They do not like oxygen, and they were pretty much all there was on Earth for billions of years.

The Great Filter theory suggests that as life becomes more complex, it must jump one or more barriers and if it fails to do so, all that remains is The Slime. More advanced organisms, bacteria, trilobites, dinosaurs and you and me, fail to emerge. Many planets, even those receptive to more advanced life, fail to get beyond the Great Filter.

My own belief is that the switch from anaerobic life, not dependent on oxygen and actually poisoned by it, to aerobic life, you, the trilobites and me that need the poison of oxygen, may have been a truly traumatic one. Many other planets may not have got beyond this.

Let’s go to that Three-Legged Cat. Assume you are an evolutionary biologist. You have never seen a cat, a dog, or any other mammal. The first cat you see has been in an accident, and had a hind leg surgically removed. How could such a being evolve? It even lacks bilateral symmetry, something shared by most advanced organisms from starfish upwards.

What you do not know is that cat is quite different from its peers, for reasons you cannot understand because you have no comparators. There may be something so distinct about the Earth which we fail to understand because we have no other examples to compare it with.

Here are two. The Earth has seasons because it is not properly upright but tilted. Other rocky planets in the inner system are tilted. Their tilts may however be unstable. The Earth is also a double planet system, in that the Moon is a sixth of its size and proportionately much larger than any other satellite and its primary in the Solar System. Is this relevant? We know tides have a huge effect on life on Earth. Would life have evolved on a similar rocky planet without such a distinction? We cannot know. Do the other cats in the litter have three legs? Or four?

Let’s go on to the Peacock’s Tail, which I believe explains the Fermi Paradox, and that lack of UFOs over East Anglia. Many male birds have gaudy plumage designed to attract females. None take it as far as the peacock, whose tail is therefore at the extreme end of an evolutionary trait already established.

Human intelligence, evolved to the extent that we can manipulate our environment and live for much longer, proportionately, than any other species before us, is an evolutionary quirk, an extreme, like the peacock’s tail, therefore.

Some creatures are quite intelligent. Dogs, pigs, other animals can react to external stimuli and adapt to the world around them, a good definition of relative intelligence. They are not just hive minds, like some insects. They display a distinctive identity.

We leave them far, far behind, to the extent of being the only species that has altered its environment in an unprecedented way. (This is not the place for an argument on whether this is a good or a bad thing.) It may have been the result of unprecedented environmental pressures, or even an oddness in human protein. Or the need to use meat to replace other foods.

Dinosaurs failed to make the grade

Any one of these may be true. But the fact remains that intelligence, of the sort we possess, has never evolved before on the Earth, despite any number of opportunities. The dinosaurs existed for almost two hundred million years. Some stood on their hind legs, with hands and opposable thumbs not much unlike ours. None ever became intelligent.

If dinosaurs, or their equivalents, existed on a planet orbiting a star ten light years away, a tiny step in cosmic terms, we would never know of it. If an intelligent, technological civilisation there existed, we would probably know. The assumption must be that life may be common, whether The Slime or something more advanced. Technological, tool-using intelligence may be rather less so, possibly vanishingly rare. As rare as a peacock’s tail.

You and I are really rather special. The evidence would suggest so. You look up at the sky. There is nothing looking back. Probably. Celebrate it. But don’t waste your brief lives looking for UFOs in Rendlesham Forest.

(I actually think that the notion that there is no other intelligence in the Universe is existentially terrifying. I do not believe it. Somewhere it exists. But there is always the Zen koan.)