The fury over raw sewage in our rivers seems only to be increasing, still with no answer from government or water companies. 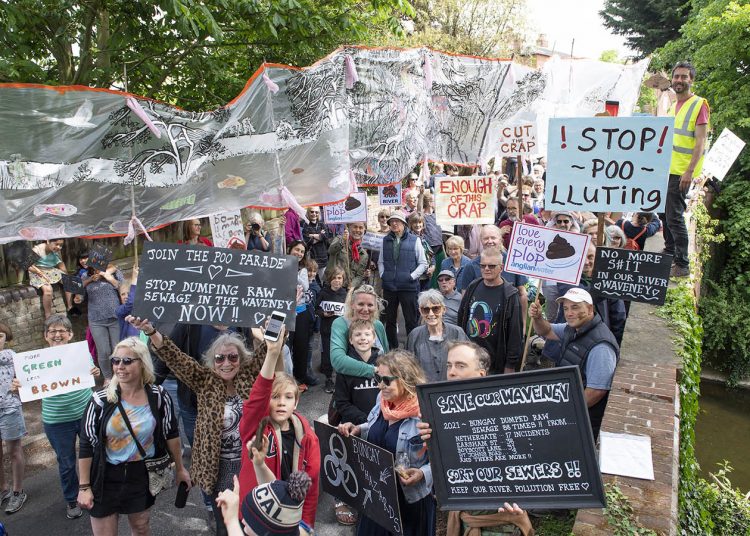 More than 200 people turned up in Bungay on Saturday, to a march in protest against raw sewage in our rivers.

The march is the latest in a continuing series of events across the region, expressing anger at the inability or unwillingness of Anglian Water to meet their responsibilities.

A thousand hours of dumping raw sewage in river at Bungay

The crowd were specifically concerned at the sewage in the Waveney, which runs through the town. Anglian Water’s own data shows that in 2021 there were 89 occasions when raw sewage was allowed to enter the river in Bungay, in over a thousand hours of dumping.

Campaigners have found wet wipes and sanitary products in the river after heavy rains. The largest pumping station is not monitored.

The situation is similar upriver at Diss, where the smell of sewage can sometimes be discerned across the town, and downriver at Beccles and Lowestoft.

Bungay resident and captain of the Waveney Rowing Club Jesse Timberlake said: “My young children play in this river. I’m disgusted to think of what is being dumped in the Waveney”.

Government blocks attempts to get companies to clean up

Local campaigner Kate Jackson explained: “Efforts in Westminster last December to get the privatised water companies to clean up their act were blocked by the government.”

MPs, including Waveney’s Conservative Peter Aldous, said that the upgrades to the sewer network required were “unaffordable for the water companies”.

Rather than clean up rivers, company pays shareholders profit of £130 per household

However, analysis from the University of Greenwich showed that Anglian Water has paid out over £5.1bn in profits to its shareholders in the last decade. This is equivalent to £132 profit from the typical £300 household’s annual sewage bill.

The marchers have vowed to continue the campaign to protect the river, which is a popular swimming spot as well as a haven for wildlife.

Organiser Toby Hammond said “I was really only expecting 20 or 30 people, it just goes to show how strongly people feel about this issue”.

Hammond is a member of the Green Party, but the protest was not party political and included people from all walks of life. 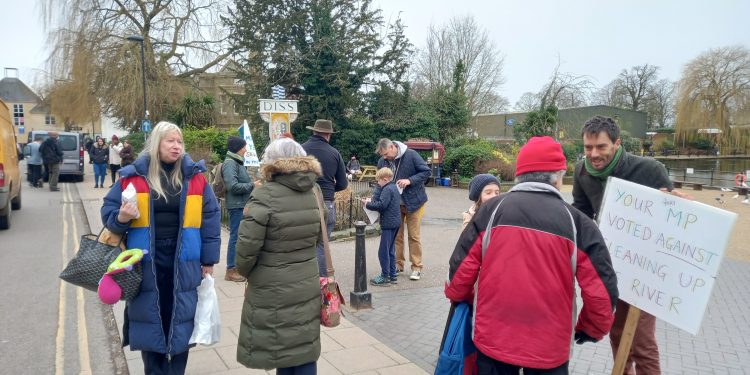