Following the 42 miles of the River Colne is a walk through history, from ancient farmland to high-tech University buildings in Colchester. 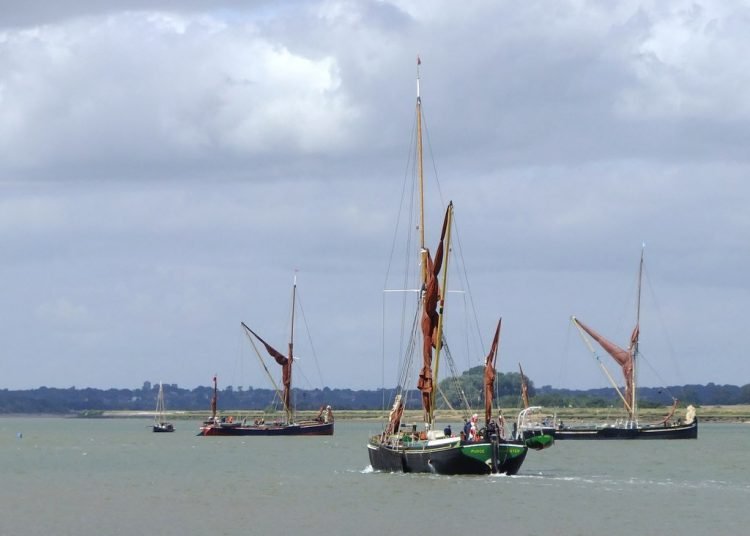 So, shall we follow the river from the source to the mouth, like a molecule of water coursing towards the sea; or from the estuary inland, like a Viking invader sailing as far as was possible? (A thousand years ago the Essex coast was plagued by Danish Viking raids.) Let’s be the molecule, and look around as we drift downstream through history.

In the gentle, green landscape of Essex, tributaries rise and join to form the Colne. We can start at the ancient spring near St Lawrence’s church in Ridgewell. From here the tiny stream meanders past the Ridgewell WW2 Airfield Museum to Great Yeldham. The Great Oak stands here, with its nine metre girth; it is listed on the Ancient Tree Inventory as ‘veteran’. Who knows how old it is – oaks can live up to 1,000 years – but no-one was counting.

The growing river snakes its way through Castle Hedingham and Sible Hedingham. Nearby is a vineyard producing sparkling wines, which surely would not have been possible 50 years ago. Hedingham Castle, a well-preserved Norman keep, is nearly 1,000 years old, but still inhabited. The Domesday Book records that Baron Aubrey de Vere ordered vineyards to be planted there in the 11th century, but does not record whether the wine was drinkable.

Walking along its peaceful banks, you could believe nothing has changed for centuries, but sadly, all is not well. Pollution, often phosphates from agricultural run-offs, is now present in much of the water. At several locations, sewage discharges also have an adverse impact. Looking at the Rivers Trust’s map, you can trace the route of the Colne by the line of sewage discharge dots. The Essex Wildlife Trust has an initiative to bring water voles back after twenty years of decline. This has necessitated the removal of mink and would be easier with healthy water.

By the time you arrive in Halstead, you notice several watermills. The wool trade flourished here for centuries, bringing wealth to mill owners, but declined in the nineteenth century. Principal manufacturer the Courtauld family switched from wool to mourning crepe, which was popular with Victorians. Queen Victoria wore Courtauld black silk crepe after Prince Albert’s death. Courtauld employed thousands, and built hundreds of homes for them. The silk industry in turn diminished in the 20th century, but existing family wealth provided funds to found the London Courtauld Art Gallery in 1932.

Moving downstream, you find several villages named after the river: Colne Engaine, Earls Colne, White Colne and Wakes Colne. Earls Colne, named after the aforementioned Earl of Oxford, Aubrey de Vere, has a well-documented history. The Benedictine priory, built in 1111, was surrendered to Henry VIII at the Dissolution of the Monasteries. A 17th century vicar, Ralph Josselin, kept a diary for decades detailing the minutiae of village life. It is still available today, should you wish to know more about yeoman farming of the time. Another historic note: in 1884 the Industrial & Co-operative Society was founded here, and was one of the last surviving independent village Co-ops until it merged in 1970 with the larger Co-op society.

In 1860 the Colne Valley & Halstead railway line opened, partly funded by local businessmen like Courtauld to carry their wares. It linked these valley villages, but like many lines, closed in the 1962 Beeching cuts. It ended at Chappel, where you could change onto a train running from Marks Tey to Sudbury. This line still exists. Indeed, there is a surprise here – the longest bridge in East Anglia. Suddenly we see a 325 metre-long viaduct of seven million bricks. Built in 1849, it carries passengers over low-lying water meadows.

Dotted along the valley, you come across pillboxes, gun emplacements and anti-tank earthworks from WW2. Essex was thought vulnerable to attack, so the defensive ‘Corps line’ was constructed, stretching from the estuary inland to Mildenhall.

Snaking through meadows, we come to Ford Street, known for 15th century thatched cottages and for being the home of Blur’s Damon Albarn during the 1980s. Further, we reach Fordham and West Bergholt, whose residents currently live under the threat of a huge electricity pylon scheme proposed by National Grid. If it goes ahead, there will be 50 metre pylons crossing the Colne nearby. Not only are locals concerned about the effects on ecology, but also archaeology: they have Roman dig sites where rare features have been uncovered. It is only natural to want to preserve these sites intact, without intrusions. How can you soak up the deep history of a place when you are surrounded by enormous, ugly, modern structures?

The River Colne at Colchester

Wide and strong, the river now surges under the A12 towards Colchester. The town was granted city status this year, but many say that it was actually Britain’s first city, Camulodunum, the original capital of Roman Britain. It is a modern place full of historic importance.

Here the Iceni queen Boudica led her marauding army in AD60. She was bent on destroying and burning the town, and murdering every single Roman inhabitant. This was revenge for horrendous acts wreaked on her family by Roman procurator Decianus Catus. Blood ran in the streets and evidence of fire can still be seen on archeological ruins.

The castle, built in 1076 on the foundations and vaults of the Roman Temple of Claudius, was Europe’s largest Norman keep. In the 1640s, Witchfinder General Matthew Hopkins used its dungeons to imprison and interrogate hundreds of unfortunate women accused of witchcraft. Tragically, many died right there.

The river snakes through town, south past the modern University of Essex campus. It makes its presence felt in the Hythe, with regular tidal flooding onto roads, a seemingly insoluble problem. Colchester’s aged sewer system also cannot cope with the volume of waste water that modern life generates. This has increased by 70 percent since 1985, leading to regular overflows into the river. A local ecologist found what he called a ‘flowing toxic cocktail’ in river water samples. Algal blooms can be caused, which kill what fish consume. In turn, birds don’t find enough fish to eat and the impact moves on up the food chain. The plan to build another housing development of 9,000 houses to the east causes concern about whether the water infrastructure will crack under pressure.

Soon, you reach the pretty riverside town of Wivenhoe, home to many academics. This was the epicentre of the 1884 Colchester earthquake, which caused considerable damage and threw fishermen off their boats into the harbour, but killed no-one. In Victorian times, Wivenhoe had the only dry dock between London and Lowestoft, and an experimental mini submarine was built there in 1905.

Out of the main town, there is more wildlife again. Fingringhoe Wick on the west bank was Essex Wildlife Trust’s first nature reserve in 1961, a site now remodelled after 50 years of gravel extraction left it a barren landscape. Now the heathland, meadow, reedbeds and ponds are host to 200 bird species, and many invertebrates and mammals. The transformation is testament to what humans can do to restore nature if they put it first.

The river mouth opens out into the North Sea between Mersea Island and Colne Point nature reserve, and we are left with a wide open image of water and mudflats. You may be lucky to see a red-sailed Thames Barge sailing majestically by. Time to reflect on all the history you have encountered and the evidence you have seen of human impacts on the river. Let’s hope that in 100 years, the Colne still retains the beauty and wildness it still has.